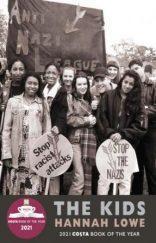 The crown of sonnets in Hannah Lowe’s third full-length collection investigates and interrogates teaching and learning with sympathy, humour and passion. She taught for a decade in the sixth form of an inner-city London college in a multi-ethnic working-class environment. Her radical curriculum meant not only teaching literature but also how literature addresses people’s personal lives and is connected to the social and the political. She is speaking to the kids, her students, but also to herself. In the black and white cover picture we see her as a sixth-form student with a group of friends, taken during an Anti-Nazi League Carnival at Brackwell Park in Brixton in 1994. That was the year after the death of Stephen Lawrence, in a racially motivated attack that spurred an investigation into institutional racism. During these years, Lowe began her commitment to fighting against racism and oppression, being herself the daughter of an English mother and a Chinese-Jamaican father. A passion for literature followed, thanks to inspirational radical teachers, such as John Toolan, to whom the book is dedicated. She became aware that studying and composing literature is one way of talking about truth, ethics and politics.

The poems in the first section are written in the voice of a teacher who is observing and learning rather than ‘teaching’ and who is in a continuous empathic exchange with her students. The poems can also be considered as a loose memoir that refers to Lowe’s experience in schools; they reflect the different students she encountered but do not shed light on any individual in particular. It is a fictionalised world that is part of reality too. Writing poetry becomes a process of mediation and exploration of the possibilities of the self that needs to negotiate with society and with its own identity, its contradictions and its freedom.

The Kids was shortlisted for the TS Eliot Award 2021 and won the overall Costa Book of the Year Award and the Costa Poetry Award 2021. It is also a Poetry Book Society choice. Lowe considers the form of the sonnet ‘as a place of possibility rather than constrictions’, a challenging approach that allows control of sorts within rules that can eventually be changed or broken.

The poems in the collection develop in intensity and expertise, and include appealing imageries and skilfully crafted lines. The traditional eight-plus-six line sonnet form is the anchor throughout, but Lowe is willing to go beyond some readers’ expectations about tone, voice and content. Thus, rather than being monologues arguing a point or making an abstract observation, her sonnets can be multi-voiced and conversational:

The poems create a scene, triggering reflections on being a teacher and a student at the same time and revisiting Lowe’s childhood and teenage years. The art of teaching is therefore a journey that teachers and students walk together; this implies boredom and empathy, funny moments and failures. Lowe recreates these scenes by using memorable protagonists such as ‘the only English kid’ or ‘the only Black girl’, examples of a reality that is never straightforward and simple, where young people need to negotiate and sometimes fight for their place in society. Being ‘British-born’ does not always grant her students a fair treatment or equal opportunities. MUSLIM SCUM and GO HOME are the graffiti slogans they pass on their way to school.

The collection also features poems about her father’s and mother’s deaths, which were heart-breaking and left her lost in her twenties. She retraces her relationships with her own teachers too in thought-provoking humorous lines; being taught is challenging and might trigger rebellion and resistance. Reading poems and political commitment are Lowe’s responses to oppression and discrimination that encompass the public and the private and need to be addressed to attain a more equal society.

The book’s final section is dedicated to her young son, Rory, and speaks of their life together in an interweaving of play and deep affection:

The poems in the collection maintain their momentum and strength until the end, gripping and enchanting the reader in a continuum of surprising scenes and deft lines. This award-winning collection deserves to be considered one of the best publications of the year.