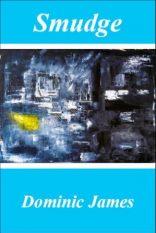 Smudge is the second full length collection from Dominic James. Thematically the book deals with a rich array of topics including reflections on the interrelationship between people and nature and travels abroad. There are ekphrastic poems based on etchings by Chagall and a sequence referencing films (The Third Man, Thelma and Louise, Aguirre Wrath of God). Mythological subjects are treated too, often merging Nordic and Christian imagery (which can send the reader reaching for Wikipedia to fathom the references); and there are poems on historical themes, such as the assassination of Thomas Becket, and verses responding to the effects of Covid lockdowns.

But I think the themes that emerge most strongly are loneliness and mortality. This is in many ways a death-haunted book, powerfully expressed in poems such as ‘Port of Call’ about a visit to Brompton Cemetery. The poem starts briskly:

The phrase ‘a rainy cup of Java’ is especially effective since it conveys both the sense of a weak cup of coffee and being watered down by the rain. Pacing among the tombs the narrator thinks of various things, trying to remember the opening lines of Graham Greene’s The Power and the Glory, noticing a robin among the headstones.

It’s rewarding to pick up on this reference to Greene’s novel, which has an epigraph on the theme of death by Dryden: ‘Th’inclosure narrow’d; the sagacious power / of hounds and death drew nearer every hour’ and the second sentence of Greene’s novel reads: ‘A few vultures looked down from the roof with shabby indifference: he wasn’t carrion yet.’ This sense of not being carrion yet is reflected in the last lines of the poem:

The theme of loneliness is pungently expressed in the title poem ‘Smudge’ where ‘Light penetrates the vacuum of my house, / bright sugar cube, jewelled spacecraft set apart…’ In the second stanza the sense of isolation is reinforced:

In the third stanza we find the narrator living now, ‘At a lower orbit’ and ‘claiming a temporary peace’. The final stanza pulls the whole poem together, via another smudge on a window pane, into a powerful conclusion, where the image of outer space from the high rise living becomes a metaphor for isolation from loved ones:

The sense of time passing and people ageing, the experience of the very transience of life, is neatly conjured up in poems such as ‘The Winterage’ where the poet spots a group of elderly French couples wintering in Morocco and reflects that

The sense of life’s fleeting pleasures, of love and death, are beautifully evoked in ‘Baker Street’ where the two stanzas contrast youth and love with ageing and death. In the first stanza:

Contrasting this, in the second stanza:

Space and time, the inside and the outside, the self and nature converge in fascinating ways in many of the poems in this collection, providing evocative instances of our ‘souls’ patrol’.