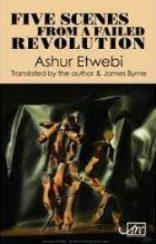 Poetry review – FIVE SCENES FROM A FAILED REVOLUTION: Edmund Prestwich is moved by Ashur Etwebi’s vivid glimpses of the continuing crisis in Libya

Ashur Etwebi’s Five Scenes From a Failed Revolution is one of the most remarkable and powerful new poetry books I’ve come across in the last few years. It’s not in any sense easy reading but I found it both exciting on a technical level and intensely moving on an emotional one.

In what follows I’ll write as if Etwebi had been its sole author, but of course that isn’t really true. We’re told the poems were ‘translated by the author and James Byrne’. Though the fundamental creation is Etwebi’s, I’m sure the sensitivity with which the English phrasing uses sound, evokes different emotional tones and seems to tap allusively into literary tradition must owe a great deal to Byrne’s own poetic skills.

An impression many of these poems gave me was one of sheer weight. They need to be contemplated and absorbed slowly, line by line, phrase by phrase. In fact I kept feeling that moments within them – sometimes single lines – were almost asking to be taken as whole poems in their own right. Lines like

explode with suggestiveness and emotional power in a way that seems to need no further context. In three of them, this power involves the speed with which the poet’s mind leaps from literal facts to vast, unpredictable, almost surreally suggestive metaphorical associations. Even in the first, where power might seem to inhere simply in the literal horror, ‘At noon’ is crucial to the flesh-creeping effect.

In his brief introduction, the Libyan-American poet and translator Khaled Mattawa describes Etwebi’s poetry as being essentially lyrical, even as he confronts Libya’s public crises. As such a description would suggest, he’s a poet of feeling. However, these feelings are seldom directly stated, at least in this book. As my quotations have probably already suggested, Etwebi’s writing depends on the power of the image. These images can be literal pictures of events and scenes. Sometimes, there’s so much power in almost documentary glimpses that any subjective expression of feeling would seem cheap against them, as in these lines from a devastating, relatively long poem about refugees crossing the Mediterranean called ‘Wait, Child, Don’t Take the Boat to the Sea!’:

Writing like this is symbolic in the way Don McCullin’s photographs of shell-shocked soldiers are – the image is literal and particular but the larger horror shines through it.

At first, then, these mostly short poems seem to break into even shorter chunks. As you absorb them more fully, you feel how the friction between these chunks, or the shock of their collisions against each other, add up to something far bigger than the sum of the parts, although, crucially, it doesn’t subsume the chunks into the greater whole. Knowing almost nothing about Arabic poetry I can’t say how rooted in Arab tradition such a way of writing may be, but I suspect it owes something to Ezra Pound’s ideogrammic method in the Cantos, or Eliot’s Pound-influenced method in ‘The Waste Land’. A passage from ‘Wait, Child’ can show what I mean:

I do wonder about the fourth line in that passage. A word seems to have dropped out – perhaps ‘are’, after ‘passage’. Inserting it would give the line a movement and tone in harmony with the line before it.

Almost everything else here makes me feel the awe that truly great poetry gives. The terse, harshly ironic first two lines wouldn’t do that in themselves, but the transition to the third makes me shiver. So much is going on as the gulf opens between human agony and the indifferent silence of nature, and between the agony of the people actually involved and the indifference or inattentiveness of the wider world. The power of verbal sound, so striking throughout the book, is particularly evident in this third line. Even as you give body to the quietness by articulating it, enjoying the sweetness and smoothness of its cadences, another part of your mind is taking in the huge, horrifying drama of the movement of ideas within it, unfolding in four steps. First there’s the quietness itself, simply stated: ‘All is quiet’. Then suspense as to what will be revealed as the sound breaking the silence: ‘but for the sound’. Then the startling shift from literal narration to a metaphorical, almost surreal mode: ‘of drowned names returning’. Then the cruel irony: ‘home’.

The densely packed quality of the writing is apparent at each of these steps. ‘Drowned names’, for example, is a little vortex of imaginative suggestions in itself. So is ‘returning home’. It contains the dreadful irony that while the refugees’ attempt to escape their homes has been defeated, they themselves, as opposed to their now-empty names, never actually will return. At the same time, it evokes the slow filtering back of news of these deaths to their loved ones, the sounds of lamentation that will follow and the haunting grief that will endure as the lost are remembered and mentioned. This is poetry that works fast, by abrupt, unpredictable development of ideas, sudden switches between literally descriptive and surreally suggestive modes, and sharp changes of tone, all of which make demands on the reader’s attentiveness.

The shifting between literal statement and an almost surreally compressed metaphorical mode is particularly effective. It makes the literal horrors more intimately and insidiously penetrating, as if they were projected through different layers of consciousness, spreading a widening stain of indefinable feelings as they do so, without becoming detached from the definite facts and circumstances that have given rise to them. But I must also mention a different kind of density that comes in the later part of this passage. In the four lines starting ‘In the loneliness of night’, the rapid, fragmentary images seem to present different scenes simultaneously. The imagination is made to whirl between picturing the refugees before the disaster, crammed together in the boat, and after it, dead bodies floating in the water and pecked at by gulls. This is the economy of genius, quickening the mind by making it take in many things at once. And a similar density and swiftness of evocation is there in the multiple associations of individual words. The smuggler’s whistle, the laughter, and the girl’s sigh each evoke a number of different feelings and call up different scenarios related to the event, often clashing with each other.

The grief and pain filling the book don’t blunt Etwebi’s sensitivity to beauty and to love; if anything they heighten it. We see it in the line about laughter, moonlight and a girl’s sigh. And in the following section of ‘Wait, Child’ there’s a heartbreakingly beautiful celebration of the power of love to overcome disaster, which I take as also being an oblique ars poetica:

Against this luminous eloquence, there are times when a kind of blankness or bafflement seems to be fundamental to what Etwebi is expressing – the stony intractability of the situation in Libya, his sense of alienation from his place of exile in Norway, even his own baffled love of his homeland. These different kinds of bafflement are beautifully captured in ‘Home’, the poignant first poem in the book:

Altogether, this is a remarkable book, one I found eye-opening and deeply moving, and that I know will repay many re-readings.