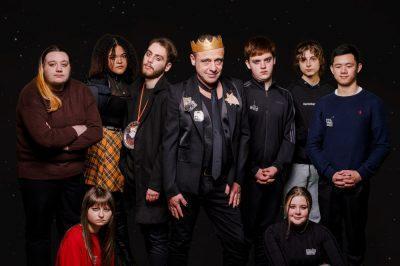 Speaking Truth to Power has come to mean “saying something to those in a position of trust or authority who don’t want to hear it,” Jeremy Goldstein, the MC of the Truth to Power Café, tells us.  It’s a non-violent means of conflict resolution whose origins lie in the anti-war movement.

Following President Vladimir Putin’s invasion of Ukraine, the phrase has taken on extreme urgency.  It’s also deeply personal as Goldstein, who has battled with HIV, drug addiction and estrangement from his father, sets a courageous example in his compelling exposition of truth as drama, therapy, and political activism.

The power for Goldstein was his father Mick, who was one of the Hackney Gang of friends of the great playwright Harold Pinter.  While the Goldsteins – father and son – fought bitterly, Mick Goldstein was in turn held back from his own ambitions to write by Pinter’s success.

The Hackney Gang was on the side of the disempowered and Pinter surely would never have wanted to inhibit one of his childhood friends, just as Mick Goldstein would not have sought to be estranged from his own son, who came to understand him only when it was too late.

Goldstein reads a letter from his now dead father in which he defines truth as “a grave into which we all fall eventually”.

That means truth is as unavoidable as death, but rather than lie buried, it lives on and is carried forward by future generations.

The link to the last generation is provided by Henry Woolf, another member of the Hackney Gang, who died aged 91 in November – not before he had recorded a performance that sits poignantly and naturally alongside digital contributions from the living generations.

Truth to Power has been performed more than 40 times in six countries.

In the online version filmed in Rotherham, the youths who bravely step forward represent the under-represented.

Those who contributed online include Darlene who, as a 21-year-old Black woman, seeks to “see the change and be the change,” while Joseph demands of the leaders who “hate change,” even when the status quo means human rights are abused, how they would feel “if the roles were reversed?”

In person appearances in the café alongside Jeremy begin with Evie who has OCD.  She cleans the microphone before she tells her condition it can “sod off now” and she will return to the self of three years earlier when she didn’t have to check the window was locked countless times when she knew it was, wash her hands endlessly or flick the light switch off and on repeatedly if that’s what feels right.

Next up is Martin, who is transitioning and introduces – or reintroduces us – to the word “thon”, short for that one, a gender-neutral pronoun that existed in the Merriam-Webster dictionary from 1934 until 1961 when it was dropped for lack of use.

We are also addressed by Brian.  He has cerebral palsy and was told he would never walk, but with the help and kindness he wants to prevail everywhere, he has succeeded in doing so.

Finally, Jacob, who, for all his doubts and his autism, knows he has the power to control his own life.

“You’ve got this.  You are good enough,” is what he tells himself – and us and constitutes his message to anyone who thinks they can abuse their power over anyone else.

Jacob’s power is also his youth that allows him to see clearly and with passion before the onslaught of the forces that corrupt the judgement of those in political or economic power.  If they refuse to listen it is at everyone’s peril.