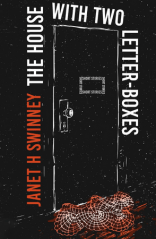 The House with Two Letter-Boxes

Survival is the word that comes to mind when I reflect on the nine short stories in this collection by Janet Swinney. The action takes place in the North East of England and mainly in the past. Knitting and crocheting became important weapons in the hands of the women who fight back and resist repeated verbal, physical and sexual abuse. If that sounds off-putting, the witty dialogue in vernacular language and the black humour penetrate even the darkest stories. And these stories are dark. Most of the male characters are violent, predatory and not to be trusted.

Often Swinney sets the scene using vivid descriptive language that has a filmic quality. In “Tenterhooks”, when a car sweeps onto the hot tarmac in front of a house:

Some characters pop up in several stories. I was glad to meet Esme and Belle more than once as I felt I already knew and liked them. Swinney also uses the technique of weaving between past and present to provide context for plot. For example, in the first and longest story in the collection, “Slipping the Cable”, we learn how Ida ended up marrying the vindictive, abusive Douglas. However, the particularly gruesome scene that takes place in front of the two young children at the end of this story does not seem plausible. This is a shame because both the environment and the people have an otherwise convincing authenticity.

“Angel of the North” is one of two stories written in the first person in this collection and clearly has a contemporary setting. The dreaded process of Quality Assurance overshadows the beginning of the day:

Things go from bad to worse on the long drive home in which the narrator’s car is locked in a public car park and she is forced to take public transport for the last part of her journey. However, an Angel of the North appears in the person of the late night bus conductor, Parminder. He refuses to take her fare and offers to lend her his mobile phone. Touched by his consideration she emails the bus company to nominate him as employee of the month. Sadly, the consequence is that Parminder gets into trouble for not following ‘procedure’, a damning indictment of the inhumanity of strict protocols, linking back nicely to the tick-box assessment at the start of the story.

Beginnings can be difficult in writing but Swinney is expert at engaging the reader in a few sentences that makes one want to read on. “Mr Singer’s Empire” starts:

I am already intrigued.

In The House with Two Letter-Boxes, the story that also provides the title of the collection, we read about a corrupt GP anxious to send his elderly patient Mrs Armitage into one of the private care homes he owns. Both the thought processes of Mrs Armitage and Dr Pallavaraayar ring true and the consultation between them is brilliantly observed. The ending of this story was shocking and satisfying at the same time. It wasn’t entirely credible but as readers we wanted Mrs A. to wreak revenge with her crocheting on the intrusive prowler in exactly the way she did. However, as a retired doctor, I did gasp at Dr P.’s risky prescription of two anti-inflammatory drugs for Mrs A. If Dr P. had wanted to keep her alive so that he could access her income in his care home, he shouldn’t have given her anything stronger than paracetamol!

Overall, this second short story collection by Swinney is very enjoyable and skilled, particularly in terms of characterisation and dialogue. She introduces us to real people in a tough working-class community who negotiate life with humour and tolerance, despite the shocking abuses that sometimes occur. I want to read more.