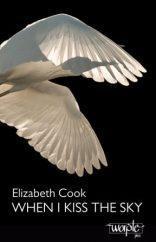 Poetry review – WHEN I KISS THE SKY: D A Prince admires Elizabeth Cook’s thoughtful and observant collection reflecting on the processes of change

First, some background. Elizabeth Cook has also written fiction, along with libretti for the oratorios The Passion of Jesus of Nazareth and Before all Worlds (a Nativity). Her novel Lux connects the Biblical story of David and Bathsheba with the poet Thomas Wyatt. Her first poetry collection, Bowl, was published by Worple in 2006, followed by a pamphlet, The Sound of Rain, from The Garlic Press in 2017. All this (for me) sets up high expectations; The Garlic Press is the pamphlet-publishing imprint which Michael Laskey set up alongside Smiths Knoll (the much-missed journal which ceased publication in 2012). Cook’s background suggests strong and sustained religious content combined with a poetic technique that has both the clarity and unshowy style that characterised Smiths Knoll.

‘These poems explore the dynamics of presence and absence’ writes the publisher in a back-cover note—and they do. When I Kiss the Sky is a wide-ranging collection containing both public work (from Cook’s year as Writer in Residence at St Edmundsbury Cathedral) and intensely personal poems about the death of her partner. Their energy comes from the keenness of her observation and her understanding of how the counter-play of presence and absence can shape poems.

Cook makes this explicit in a 10-line poem near the end of the collection, as though summing up all we’ve read so far. In ‘At the School of the Tao they taught us’ students learn —

This poem could remain simply as one about observation in the natural world but Cook moves the activity much closer, into human interpretation and that familiar optical illusion known as the ‘figure-ground illusion’ — the one in which ‘Two identical dark profiles/ press on a white candlestick.’ Because the image is reversible the viewer can see it as either two profiles (the dark images) or shapely white candlestick (the white space between them). Both are possible — and equally valid. In accepting this, Cook makes it dynamic: ‘… let’s make absence the thing:/ that pillar of light.’

Attention to pattern, both within nature and human belief, underpins her collection. It opens with a poem to linger over, ‘Exemplum – (for Samual SSF)’, in which a bird hunts across a field, crossing and re-crossing the space. Its quiet, patient movements are compared first to a woman searching for faults in a length of fabric, and then a tractor —

The second (shorter) stanza reveals the bird as a red kite, hungry and with young to feed, but never rushing her work. A poet concerned primarily with the natural world could have ended at that point but Cook finds in it another comparison, reaching into fourteenth century theological writing —

Reality and metaphor combine in that final image. Writing about his recently-published Collected Poems, Rowan Williams made a distinction between ‘religious poets’ and ‘poets for whom religion matters a lot’. He placed himself in the latter category, which is where Cook also belongs. Her poems are informed by Christian belief but they are not ‘about’ Christianity in that more limited sense. They arise out of her faith and that faith is her context, not a subject she has to explain.

This is apparent in ‘Edmund in Edmundsbury’, a six-section poem stretching over ten pages, encompassing not only the history of the saint but the present-day life of the Cathedral. Some light-touch notes fill in the references for readers unfamiliar with Bury St Edmunds—the sugar-beet factory, the Greene King brewery— but the facts St Edmund’s life and martyrdom are recounted with compelling clarity. Decapitated by invading Danes, Edmund’s head was guarded by a wolf until searchers found it as it called ‘Here and Here and Here’. The current whereabouts is uncertain—Toulouse has a claim—but for a time this church became England’s premier cathedral. It’s Cook’s skill that brings these threads, historical and contemporary, together to show how a twenty-first century cathedral works. She quotes prayers—

The ‘welcomers’ are prayed for, along with the guides. Cook can sneak in humour, too, via the tourist, exhausted by her lengthy visit, exclaiming as she heads for the tea room ‘But let’s get some tea./ I could murder a Danish.’

Edmund’s head is one of the absences explored in this collection, in a story that isn’t over. Cook moves the final section into prayer and how, even in absence, Edmund is ‘here’. This poem first appeared via a small press, presumably as part of her Writer in Residence role, and I am glad it can now reach a wider audience. It has a lively, fresh register — and none of the dutiful description that can sometimes weigh down such commissions.

Poems about dying and death emerge gradually in the wider context of poems about the natural world, the workings of memory, and of art. In ‘Approximate’ she is ‘at your bedside, obedient/ to what ineluctably draws nearer.’ Poems contain a sense of departing, of questioning the quiet process by which presence becomes absence. ‘Token’ draws on an earlier memory, of swimming from a boat to an island, returning with a sprig of flowering honeysuckle in her teeth, to end —

The ‘ground’ with which Cook had ended ‘Exemplum’ becomes the graveyard in these final poems— ‘For the place/ where your body is actively ceasing/ to be you.’ (From ‘at the churchyard’). Process is a part of these poems; nothing is still, whether it’s two hares racing over a ploughed field (‘Can you see?’), or a cow lowing for her calf (‘Calf’), or a cormorant diving and re-appearing (‘as the shag dips’). She merges loss and the physical world, recognising how close the felt presence of the dead has become —

But with the passing of time she discovers that her dead arrive quickly, ‘fussy and clamourous’, to share—what? For now Cook can only call it ‘something.’

Loss becomes lighter as it permeates all of the natural world. The final poem, ‘as chimney sweepers come to dust’, considers dandelion seed-heads, their delicate seeds floating ‘everywhere’, inescapably.

Perhaps this is how the title connects with the collection. When I Kiss the Sky is neither the title of a poem nor a line from one of the poems. Does it suggest that lightness of seed heads, that change from presence to absence? I don’t think I need an answer to this; shaping the question is enough. So much of this collection deals with the inevitable process of changing and ways of paying attention to it, whether this is by theologists, historians, writers, architects or simply the individual person. It is a thoughtful and observant collection.