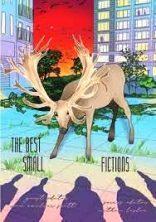 The Best Small Fictions anthology from Sonder Press has been going strong for three years now under the guidance of series editor Nathan Leslie. As he notes in his introduction, the stories in this volume were mostly written and published during the height of the pandemic, a period of uncertainty and high anxiety for all of us. A year of lockdowns, a year of isolation. One of the eleven spotlighted stories, “Lucy Ignores Death,” by L. Soviero, seems emblematic of the thrust of these stories. Originally published in Smokelong Quarterly, it’s the retrospective story of a life, which ended when Lucy drowned as a high school lifeguard, a detail she ignores, only remembering it when she is in her seventies. How 2021! Magical and mundane both at once!

The Best Small Fictions 2021 contains 133 stories, an essay by the flash fiction master, Grant Faulkner (“13 Ways of Looking at Flash Fiction”), and interviews with editors of five spotlighted journals in which flash fictions are published.

Faulkner points out in his essay that of all the forms of fiction, “flash” is the only one described with a metaphor. He then goes on to present thirteen different metaphors for flash fiction, my favorite of which is the one spawned from a quote by Dorothy Parker, who said, “Brevity is the soul of lingerie.” A flash story is the lingerie itself, Faulkner muses, an invitation to come hither, a promise, a hint. He goes on to note, “The beauty of a firefly’s light is not how it illuminates the world, as the sun does, but in how it illuminates the darkness. Sometimes it takes the smallest of things to open up the biggest of spaces.”

They’re all so good – the best small fictions of 2021, indeed – but with so many to choose from, we can only look at a few as examples of “flash” to illuminate the anthology. Some flash fictions light from the first sentences, some illuminate the darkness at the end.

Stories that snag you from the start include Brett Biebel’s “Kayfabe” which originally appeared in Third Point Press. It starts with the intriguing sentence: “Maybe three years after the divorce came through, I asked Gloria if she ever thought about getting back on the old horse, and she said she only had room in her life for two men.” Or take “The Opening Ceremony,” which appeared in The Common, Bushra Elfadil’s story translated from Arabic by Elizabeth Jaquette, which begins “Every Friday morning, all the residents in the neighborhood of Wilat in this drab African city wait for the General to appear….” You feel the tension right away. Diane D. Gilelette’s “An Apology, of Sorts, to My Brother at His Funeral,” which was published in Reflex Fiction begins: “Let’s say we grew up with parents who loved each other.” Right away you want more.

Babak Lakghomi’s story, “The North,” originally in American Shirt Fiction, begins: “My uncle was driving us north, where the enemy planes hadn’t yet attacked.” Lakghomi was born in Tehran and currently lives in Ontario.

Others hit you over the head with their conclusions. Epiphany Ferrell’s “Regeneration,” which first appeared in New Flash Fiction Review, about a girl with a rare medical condition, does both. It starts:

The story ends with a blaze, mother and daughter looking at pictures in a book. “She used her elbow to slide the screen. Her mutated scorpion hands could no longer do it.”

Robert Scotellaro’s cryptic story, “How to Build a God,” originally published by Flash Boulevard, finishes with a flare: “But the crows, the crows seem to understand something we do not. That sticks. Branch to branch, perhaps. With a single screech against the silence. The only page they turn.” Move over, Poe!

The Best Small Fictions 2021 is a collection of small gems that make you appreciate the art of flash fiction and want more – here’s to 2022!