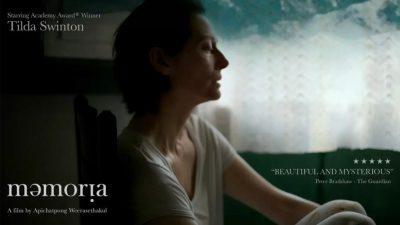 Without spoiling your enjoyment of Memoria I think it’s permissible to reveal a very brief, and very generic, SF moment that only critic Tony Rayns has commented on.  A whale-shaped space craft, barely camouflaged by the flora and rocks of the Columbian countryside ascends to fly away; leaving a shining white circle that quickly disappears.  Rayns goes on to suggest that the film’s strange hermit man, deep in conversation about memories both individual, historic and cosmic, with Tilda Swinton, may or may not be an alien.

After the UFO sighting we don’t see Tilda Swinton again.  I wouldn’t want to speculate that she’s been abducted by an alien power.  No.  Memoria can’t really be categorised as science fiction.  Apichatpong Weerasethakul loves to tease.  The magic monkey (apparently an invention of the director and not Thai folklore) of his film Uncle Bonmee Who Can Recall His Past Lives has been seen as a referential nod towards Star Wars.  It’s as if Weerasethakul was irreverently saying to his audience, “Well if you want my enigmatic Memoria to be ‘explained’ a bit of SF might help you out”.

But Weerasethakul’s cinema can’t be comfortably grounded.  His films are serenely spacey and dreamlike.  They are metaphysical, puzzling and mysteriously absurd with an integrity and tenderness which prevents them from toppling into craziness: all convey a Buddhist tinged perception of things continually questioning the illusory nature of surface appearances.  It’s a humane, playful and transparent vision.  And in Memoria this vision has now shifted from his native Thailand to Latin America.  Weerasethakul’s concerns have been deepened by a plot less, but rigorous, scenario depicting dreams, animism, re-incarnation, surreal happenings, the transience of time and memory all still sheltered under the umbrella of a Buddhist void.

As for the bare bones of the story – Jessica Holland (Tilda Swinton) is a Scottish woman botanist who is visiting her sick sister Karen (Agnes Brekke) in hospital in the city of Bogota.  One night she is woken up by a mysterious noise.  On visiting a recording engineer Jessica describes it as sounding like “a ball of concrete hitting a metal wall surrounded by seawater” and also as a “rumble from the core of the earth.” Unable to escape from the thumping noise Jessica visits a doctor who says that local people suffer auditory hallucinations.  Initially she’s reluctant to prescribe drugs and instead gives Jessica a leaflet about Jesus (that last prescriptive touch being a lovely example of Weerasethakul’s wit).

Commentators on Weerasethakul’s films talk of their very Asian sensibility rejecting traditional Western film narrative.  Yet this is not the case with experimental methods.  The director’s list of his all time favourite films includes Coppola’s The Conversation and Andy Warhol’s Empire.  Weerasethakul employs long held shots dwelling on the profound or inconsequential moment – though often challenging us to really know the difference.  The static Warhol shot of a building and more importantly Copolla and Walter Murch’s mix of surveillance activity sounds and modern jazz equally fascinate Weerasethakul.  In Memoria he begins to explore sound design more deeply.  The sound of falling rain, machinery, car alarms, memories of children and friends’ voices become embroidered on the soundtrack almost as a consequence of the strange thumping noise trailing Jessica.

However Memoria also appears to share with Blow Up an obsessional search to discover a relative truth and meaning.  In Antonioni’s film a photographer has captured more than the image of two lovers in a London park: after constantly blowing up the negatives David Hemmings discovers what appears to be a dead body.  Similarly Memoria offers Tilda Swinton an auditory mystery.  She’s aided by a recording engineer to recreate the sound in his studio (Though we never find out what makes this noise or where exactly it’s coming from).  Whilst Blow-Up’s famous tennis court sequence, minus racket and ball, with only tennis sounds, questions our perception of reality as acutely as any of Weerasethkul’s cinematic illusions (My favourite Weerasethkul film is probably Syndromes and a Century – a serene blend of comedic drama and spiritual refection).

Yet Memoria’s spiritual search (beautifully realised by Tilda Swinton’s superb performance) isn’t to be de-railed by the caring humour of Syndromes.  For Memoria has a darker tone.  Despite a possible alien force; a dog from Jessica’s sister’s dream following her; the disappearance of helpers and a Jessica who might succumb to panic attacks this is no dystopian affair.  Jessica’s sound ‘threat’ might be overcome or she will have to live with it.  We never learn of her resolution.

I was left with a strange, though touching, sense of neutral uncertainty; suspended with Jessica’s determined sound: as if it was some micro-echo of the big bang that created a universe or the whimper after we’ve ended our world.  Though Weerasethkul wouldn’t ever say that or give us any clues.  He’s on record as stating, in a cavalier manner, that it doesn’t bother him if people find his films profound or nonsense.

My own feelings are for the former over the latter.

If Weerasathkul’s latest film lacks his usual tenderness, joyful fun and affirmation it’s compensated by the tough courage of its exploration.  Instead of gentle, often disconcerting, comedy we are given a serious prolonged test containing neither hope nor despair but, along with other sensitive filmmakers, of the long-take, much patience, reflection and finally unanswered questions.

Memoria is a remarkable non-judgemental and hypnotic experience.  It makes you simply look, examine and contemplate the evidence of the image.  And we don’t do that enough, anywhere within or outside of the cinema.

Memoria is on selected release in cinemas and is screening throughout January at the BFI Southbank.