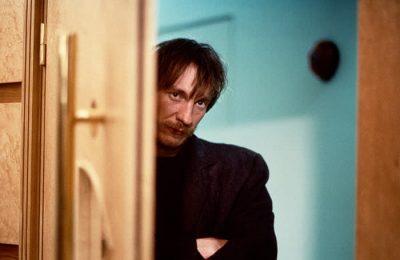 Recently I’ve been disappointed by the films of Mike Leigh.  They seem to have lost their cutting edge.  Both Mr. Turner and Peterloo (though of radical subject matter) felt mannered, being staged like static history lessons in period filmmaking.  Whilst the better social observations of Another Year alternated with moments verging on self-parody.  I hope this is temporary.  I hope I can re-engage with his world.  I hope one day Leigh will return to producing a film like Naked which twenty nine years on still retains its visceral power.

In 1993 Naked was an abrupt shift from Leigh’s domestic comedy dramas.  This raw and provocative film, full of black humour, about the underbelly of London cutting into a morally confused lower-middle class, both excited and dismayed people.  It was, and still is, though far less now, a controversial film.  The issue was its perceived misogynistic behaviour and acceptance of this by the female characters.  From some quarters there was a feminist outcry.  Then seven years later, after it was re-released, there was a largely more consensual acceptance that Naked was a masterpiece that abrasively dealt with British society in the wake of Margaret Thatcher’s departure – there’s a pertinent and stinging moment when anti-hero Johnny encounters a Scottish man, in Soho at night, calling out for his girlfriend: to his cries of “Maggie! Maggie!” Johnny calmly says “Those days are over.”

I think Naked is a great but fractured film to be carefully placed alongside of Secrets and Lies, Vera Drake and Topsy Turvy as one of Leigh’s best films.  But before I discuss its flaws let me outline the plot and style.

After sexually assaulting a woman and stealing a car Johnny (David Thewliss) escapes from Salford and heads for London to visit Louise (Lesley Sharp) his ex-girl friend.  Johnny meets her flat-mate Sophie (Katrin Cartlidge) and they have sex – to the annoyance of Louise.

Then the restless and constantly haranguing Johnny departs to wander the streets.  He encounters a prostitute, a woman working in a café, a security guard for an empty office building, is attacked by a man pasting up posters and then beaten up by a gang in an alleyway.

Rejected and injured Johnny returns to Louise’s place to face further emotional turmoil – the return from holiday of third flatmate Sandra (Claire Skinner) and Jeremy / Sebastian (Greg Cutwell) a repellent and vicious landlord whose let himself into the house and had wild sex with Sophie.

So why should we care about an educated, unemployed man who verbally attacks those, who try to accommodate him, with such fury and self-destructive energy? Well because Johnny, with his existential despair of the human condition, is sympathetic, eloquent, perceptive and often very funny: having sufficient self awareness and intelligence to be saved from falling into self-pity.  Johnny is a pain in the ass but he’s also a romantic and an idealist, a stinging commentator on the state of the nation, and a lonely and lost man.  A complex bundle of selves brilliantly realised in a marvellous tour de force from David Thewlis.

The filming of Johnny’s journey, and dark night of the soul, is a technical triumph.  Naked displays Mike Leigh’s most exciting and daring camera movements, biting editing and edgy photography.

Think of a modern neo-realist scramble through hell that’s Scorcese-like (minus, for me, the problem of Scorcese’s earnestness) and you have Naked.  It’s a 1990’s Dickensian vision of London streets superbly realised by Dick Pope’s cinematography.  The scenes where Johnny trails the poster man, revealing wall after old wall of fresh and peeling posters recalls, aided by Pope’s de-saturated lighting, John Orlando Parry’s 1835 painting, A London Street Scene.  Accompanying the intense visuals is Andrew Dickson’s sparse music, employing double bass and harp to create an atmosphere of search and pursuit.

Finally I return to what badly fractures Naked.  It’s not so much the misogyny, certainly not in the case of Johnny, but the quality of acting out such an intense hatred of women from Greg Cutwell playing the repellent yuppie landlord.  Over the decades and after three viewings, his performance still comes across as caricature.  It’s too exaggerated and over-played to convince me.  The tone is wrong.  Indeed Mike Leigh directs some of these early landlord scenes, set in a posh restaurant and massage parlour, with satirical sneers of a very obvious kind.  I see why Leigh wanted to contrast the misogyny of the landlord with the alienated Johnny but was that Jeremy / Sebastian sub-plot really necessary and what did it dramatically add to the film?  And as much as I enjoyed Katrin Cartlidge’s terrific performance there are moments when she (Sophie’s “hippy-dippy friend”) is a wee bit shrill.  Sandra (Claire Skinner) is fine as the breathlessly shocked nurse.  And Sophie (Lesley Sharp) constantly lights up the screen as the warm and emotionally grounded admin assistant: still part-hoping to again be Johnny’s partner.

Reservations aside the concerns of Naked haven’t really dated and remain compelling.  Naked’s passion is heart-felt and serious.  It’s full of loneliness and how connecting with others can be thwarted by politics, social pressures and messed up temperaments.  There are no obvious or easy back stories for Naked’s vulnerable characters.  We can only intelligently ponder on what those histories are for us, between the breathless gaps in the anger, of Mike Leigh’s powerful and insistently compassionate film.