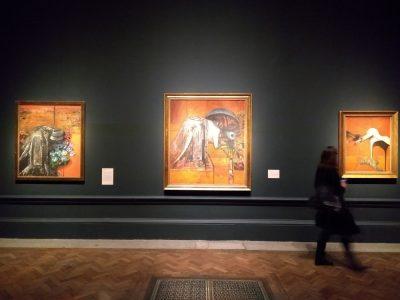 The contemporary commentator on all things political and cultural, Jordan Petersen, has proclaimed on more than one occasion that “life is suffering”.  If you need visual confirmation of that, look no further than this great exhibition of Francis Bacon’s work.  Pain is expressed in every depiction of teeth bared in grimace, of bodies locked in contortion.  This gathering of paintings from all around the world, including from a good many private collections, presents Bacon as the chronicler par excellence of the dark side of the human condition, of the correspondences between human and base animal life.

The fascination with animals started with his early life in rural Ireland.  His father trained race horses and the milieu of racing, hunting, dogs and foxes doubtless left an impression.  He had a lifelong fascination with slaughterhouses and had his drinking companion, John Deakin, famously photograph him holding two sides of beef.  This exhibition of hugely impressive, visceral paintings sometimes depict humans as fantastical and terrifying animals, as in Second Version of Triptych 1944 (1988) and sometimes in direct association with animals, as in Head IV (Man with a Monkey) (1949).  For Bacon, beneath the veneer of civilisation, humans are animals like any other.

Always something of an outsider – gay, masochistic, a gambler and alcoholic – Bacon’s deeply rooted concerns were mortality and the futility of life.  Two of his brothers died young.  His lover, George Dyer, committed suicide.  Dyer is featured in two great triptychs in a room devoted to triptychs.  In one, Three Figures in a Room (1964), the subject is seen in the acts of consuming, sex and defecation.  (A pity that Three Studies for Figures at the Base of a Crucifixion (1944), his first substantially recognised masterpiece is not here, but being in Tate Britain it’s only a mile or two away.)  A naked man on all fours (Man Kneeling in Grass, 1952), two men in a clinch (Two Figures in the Grass, 1954), and two men wrestling on a bed (Two Figures, 1953) would all have been intensely provocative, even risky, in the period before the decriminalisation of homosexuality in 1967.

Bacon spoke of “the whole horror of life, of one thing living off another.” Not that he would have had any truck with progressive movements such as that for animal rights.  If anything he maintained a morbid fascination with the violence inherent in the animal world.  Several of the paintings here reflect his interest in bull fighting and one, Paralytic Child Walking on all Fours (from Muybridge), 1961, could well engender disquiet in today’s woker-than-thou audience.  The child’s face is deliberately obscured in order to draw us towards its awkward, simian-like bodily stance.

He painted portraits, but not to flatter.  Whether a medieval Pope (Head VI, 1949) or a businessman in a suit (Study of the Human Head, 1953), his subjects howl or snarl and are confined within vague geometric cages.

Bacon was self-taught and did not take up his art until the end of his twenties.  He painted with vigour and abandon, attacking the canvas without much preparatory drawing and sometimes leaving large patches of bare, un-primed canvas (also a characteristic of some of Hockney’s early work).  One such picture, probably my favourite in the whole show, is Dog (1952).  The feral beast, tongue lolling out, takes centre stage on a bare canvas hexagon whilst a few cars and a palm tree casually occupy the background.  The exhibition closes with a real treat: his very last re-discovered painting Study of a Bull (1991).  Rendered almost in silhouette the beast stands proud but doomed, possibly a comment by the artist on himself.

In summary this is a show where kindness, joy and love are not to be found.  If there is desire it is with overtones of violence.  To quote one of the interviewees in Ryszard Kapuscinski’s The Emperor – his account of the downfall of Haile Selassie – “How, then, is one to confront this threatening creature that man seems to be, that we all are?  How to tame him and daunt him?  How to know that beast, how to master it?”  In Bacon’s case, it was by painting him.