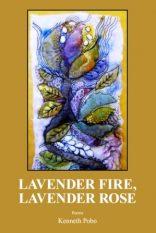 In the 1950’s, which Ken Pobo also writes about in some of these poems, during the McCarthy era, the “Lavender Scare” was a state-sanctioned witch-hunt to remove homosexuals from federal government. In 1969, the color was an emblem of “gay power,” following the Stonewall Inn riots when police and gays clashed outside of a New York gay bar.

Lavender Fire, Lavender Rose, winner of the BrickHouse Books 2021 Stonewall Chapbook Competition, captures both the horror of continuing homophobic violence and the legitimacy of the gay perspective and homoerotic love. “Late 1955,” a poem set in the Eisenhower years (Ike’s Executive Order 10450 sanctioned the discrimination against homosexuals in the federal government), depicts life in the closet –

So much of the hatred and violence, as this poem suggests, is perpetrated in the name of religion. The poem that opens the collection, “Recent Developments in Gay American History,” features a homophobic pastor who advises,

“Before I Came Out” features a “Pastor Clack” who cautions against sex in general and implicitly the “sin” of homosexuality.

But after the speaker of the poem comes out – sheds the chastity belt – the world becomes a more vivid and welcome place:

“Velvet” is another poem featuring a “Sunday school teacher,” who indoctrinates his class with images of Jesus, while, subversively (so much of gay life was necessarily under the radar in the suburban town of the speaker’s late 50’s/early 60’s youth), “I listened through / a wire in my transistor radio / to the Mamas and the Papas sing ‘Words of Love’ (dear Cass).”

“Leelah” is yet another poem in which religion is used to stifle sexuality. It’s about a trans kid committing suicide by leaping in front of a truck on the highway.

“Leelah” is the name Josh had chosen.

School is another place where gays are singled out in these poems. “Magical Misery Tour” recounts how “Boys / came after me – I didn’t / do well at the games.” “Theme for English C” is written to a professor. “You’re straight, / a perfectly fitted back door. / Gay, I don’t fit.” The professor has instructed the students to write a poem about themselves. The speaker is not sure if it is safe to write about being gay. But at last the student decides to follow the instructions.

Is this the same professor we meet in “Unlearning”? “That creative writing prof I had sophomore year / who said Whitman wasn’t gay”? The student knows he can’t turn in

The attraction of femme fatale icons and the camp aesthetic generally, which delights in impertinence, is evident throughout these poems as well. Two poems allude to Bette Davis (“On My Knees Again” and “Open Shed”). Davis once remarked about gay men, “They are more knowledgeable, more loving of the arts. They make the average male look stupid.” How could you not admire her?

Judy Garland likewise is found in two of the poems. “Flaming” concludes:

Abenego is one of the men in The Book of Daniel who is tossed into a furnace but saved by God. “Flaming” takes place in that iconic suburban town, Republican and conservative, as does “”Confederate Judy,” which deals with trick-or-treating on Halloween, wanting to dress up as Judy Garland but deciding it’s not safe to do so.

The Advocate once called Garland “the Elvis of homosexuals” for her value as a camp figure.

Pobo’s skeptical perspective on gay acceptance is evident in “Wedding License,” about the milestone of legal gay marriage, which nevertheless amusingly alludes to the camp sensibility:

The collection ends on “Piles of Old Cruelties,” a vicious reminder of the homophobic violence that continues. He is unable to forget all the cruelties he has experienced for being gay, all the nasty words and actions, and he sees himself stumbling over the piles,

But let’s hope not! Better to end this remarkable collection of poems on the triumphant note of “Come Up and Out”: