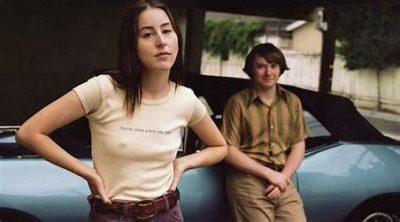 The title Licorice Pizza comes from a long gone record store that director Paul Thomas Anderson knew when he was growing up in Southern California.  It featured a female cook holding up her freshly baked ‘licorice pizza’ – a yummy black vinyl record!  That image helps to describe the retro-flavour of this utterly delightful film; licorice being a sweet, sticky and shiny food invading the solid pastry base of such an Americanised meal.  No longer reliable Mom and apple pie comfort but sweet root plant blackening the teeth of rebellious kids: Anderson gives us an apt metaphor for a conformist America under attack from 70’s radicalism.  Although it’s never an overtly political film Licorice Pizza does contain pointed TV images of Richard Nixon and the oil crisis: the Anderson ‘politics’ are more of the “personal is political” sort – in 1973 a bigger space existed for his middle class generation to be more liberated and have free-wheeling fun.

Critics, audiences and film publicists have called the film a coming of age comedy drama.  It may be that but it mercifully dispenses with the clichés of teenage angst and the responsible burdens of maturity.  I’d prefer to view Licorice Pizza as a coming to terms with my age (15) film in friendly sexual tension with a coming round to accepting my age (25).  The 15 year old is Gary Valentine (Cooper Hoffman, son of the great Philip Seymour Hoffman) an overweight and charming business huckster and child TV actor.  And the 25 years (or at one point, maybe 28?) belongs to Alana Kane (Alana Haim) an attractive woman looking for meaningful work, a guy (other than Gary) and a focus in life.

For Haim and Hoffman this was their first big film role and they are brilliant; bringing a vividness and edge to their parts that Anderson obviously relished.  He’s a marvellous filmmaker whose great gift is to convey a sense of the fully-lived moment.  Where many lesser directors often cut away too quickly from an actor, delivering their lines, Anderson lingers to allow his actors time to carefully think before responding.  This is aided by his skill with long-held tracking shots of Gary and Alana arguing, given their age difference, if they are suitable for an amicable friendship, never mind the legality of a full-on relationship.  Anderson allows his characters to spontaneously express their feelings and on reflection assess what’s only true for the fleeting moment and, more importantly, authentic for the longer term.  That’s appealingly soulful and very Paul Thomas Anderson.

Of course their on/off love situation can be found in numerous classic romantic Hollywood comedies eg. The Philadelphia Story.  As for a younger man clashing with an older woman scenario there were moments when I felt Licorice Pizza was harking back to The Graduate: both films sharing a satirical energy and a music soundtrack in tune with their times.  For Mike Nichols it was his contemporary America.  For Anderson a recreated zeitgeist that if you experienced the seventies is very recognisable.  (At the screening I attended some people in the audience didn’t get the cultural references nor laugh at the dated, but always in character, social behaviour – viz the setting up of a Japanese restaurant scenes, that’s hilariously funny.  I wonder if they also understood Sean Penn playing a man named Jack Holden? – a thinly disguised send up of the macho-spirited Hollywood star William Holden.)

The unlikely, made warmly believable, meeting up of Alana and Gary dominates a meandering (but so effortlessly rigorous) film.  Plot less and character driven, all its cameo parts are gems of social observation –take for instances the lanky-haired young man supposedly spying on the politician’s campaign office where Alana works.  Only a three minute screen-time encounter but made memorably sinister.

We really care about everyone in Licorice Pizza spinning inside an edgy, very funny and intensely human tale.  It left me with a sense of joy and upliftment.  All very romantic, yet unsentimental: a film armed with plenty of emotional intelligence to shoot down in flames any formulaic romcoms.  Licorice Pizza might just been the best new film of 2022.  I’ll wait and see.  But it’s undoubtedly, so far, my most genuinely loved film: likely to become a future classic and, very much today, a not to be missed entertainment.

Licorice Pizza is presently screening in a beautiful 35mm and digital print at the BFI Southbank.