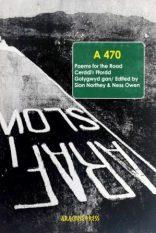 Poetry review – A470: Pat Edwards reviews an anthology inspired by the road that runs the whole length of Wales

Anyone who lives, works, or takes holidays in Wales will most likely be familiar with some part of the A 470. This road, for good or bad, runs the length of the country through towns, cities and some of the most spectacular scenery Wales has to offer. This bi-lingual anthology is a road trip, a journey, a celebration through poetry of what the road means to those of us who have experienced travelling parts of this epic route. It’s at this point I must show my hand and declare that I have a poem included, but I promise not to mention that again!

Unusually and rather strikingly, the journey starts with a poem all in capital letters with some picked out in bold declaring, ‘‘THE ROAD TRAVERSES MORE THAN PEOPLE AND PLACE IT IS THE TIME THE ROUTE THE JOURNEY THE TRAVELLER’’. This poem by Glyn Edwards reminds us just how extraordinary – though sometimes daunting – driving the A470 can be, and how getting from A to B is redolent of our motives, moods and mindset and so much more. It helps set the scene for poems recalling very specific outings as well as those where more metaphorical trips through memory, cultural connection and collective hiraeth are explored.

In ‘Hacrwch/Ugliness’ by Sion Aled, we encounter the well-known mystery that is the Ugly House/Ty Hyll in Snowdonia. The poet concludes that “the ugly is often just in our words”. Perhaps it is also in our actions such as in ‘A Mountain We Climb’ where Rhys Owain Williams reflects on his grandfather having “Welsh beaten out of him by a headmaster’s cane”. The idea that through words and actions Wales strives to showcase its uniqueness and identity is a theme revisited in many of the poems here.

Other poems in the anthology chart how the A470 is often the means to an end, our way of accessing important elements of our lives. In ‘About Four Hours’ Sian Northey imagines the road as “one long ribbon” that leads her to:

This poem evokes the “concertina folds” of the long journey to take advantage of what Cardiff has to offer as a capital city and also how we are changed and enriched, even made into “another person/at the other end.”

Towards the southern part of the A470 is the Welsh wonder, the Brecon Beacons. Further north mighty Snowdonia is a dramatic feature. The road skirts and cuts through these mountain ranges, offering respite from less interesting straighter sections. However, our poetic travellers can encounter drastic changes in the weather conditions, find accommodation fully-booked or run out of fuel. In ‘Out of Petrol’ Gwyn Parry tells the romantic tale of “no vacancies…and red warning flashes/on the dashboard…over twenty miles of mountains”. The stranded couple end up sleeping in the car, their bed “made from two sleeping bags/under a blanket of Welsh wool”. They endure, or perhaps enjoy and never forget:

When they wake up they find “the car a crystal cave of frost and glittering ice.”

Not all journeys reward us with the beauty of shared experience; some are simply too long and tiresome, blighted by car sickness or sad reminiscence. In ‘Travel Sick’ Ness Owen suggests “the road is not our friend” and recalls the poet Hedd Wyn, born in Trawsfynydd, who died in WW1:

Death also haunts in ‘Drive Through the Darkness’ by Non Prys Ifans, describing a journey made in a lost loved one’s car. The driver has to “move his seat closer to the accelerator” in order to drive and she feels “his warmth in the seatbelt, his fingerprints on the steering wheel”. She imagines “his journey’s end in the undertaker’s silent store.”

There’s a sadness too in Nicholas McGaughey’s ‘North/South Divide’, in which the poet talks about children of estranged parents “dreading a weekend with [their] new half-families”, stopping at Builth Wells, “a dropping-off point for kids/who were the flowers of dead weddings.”

Of course, the birds and creatures, the elemental encounters available to us on this 186 mile road feature in the poems, as do trips to rugby matches, myths and legends, history, singing, all that you’d expect from a ride through Wales. Some poets though have their own unique way of describing their love of country, their take on a road that runs the whole length from north to south. In ‘Unzipping Wales’ Ben Ray “pulls downwards” perhaps like someone removing a costume from a manikin. We feel the fabric “peel away”, become “rumpled cloth”. The first “resistance” felt is in the Valleys where we sense “the unknitting communities and pulling apart coalfields”. There is jeopardy near “the red of Castell Coch”, fear that spilling this “will stain the tarmac”, until finally you hold “the unzipped country in your hands”. Ray urges us to dress in the costume, to “put it on” and find “it’s the perfect fit.” I greatly admire this almost seductive imagining, the risk the poet takes in wanting to dress up in such figure-hugging, new, yet familiar couture.

This anthology of fifty-one poems truly has something for everybody, and that is surely testament to the craft of the poets, their wide-ranging style and commitment to sharing their many different views of what the A470 represents. I think it is just glorious to see the poems in both English and Welsh, to be able to appreciate the worth of both languages and to play at picking out particular words and phrases and find them transformed like little spells in a new tongue. These poems highlight the many facets of Wales, what unites and divides, what keeps us here or brings us here for the first time. Let’s give Simon Chandler the last word about this wonderful, awful length of tarmac, which he reminds us came