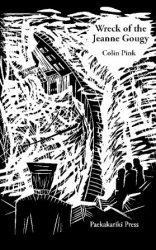 It is a pleasure to pick up a book published by Paekakariki Press. They are always a thing of beauty with wonderful attention to detail, from the handsome flap jacket to the thick cream paper. Paekakariki lovingly produce books from their workshop in East London, using their own letter press and often incorporating line drawings alongside the poems. This is a lovely addition to their catalogue.

The poet Colin Pink has taken the tale of the wreck of the French trawler Jeanne Goughy and set it as the main poem in this collection. In November 1962 the boat capsized in bad weather at Gamper Bay – between Sennen Cove and Lands End. Out of a crew of 18 trawlermen, only six were saved.

Poets are often attracted to shipwrecks and there is something of The Rime of the Ancient Mariner in this story. The repeated refrain of ‘Oh God, not again! ‘deepens the mounting feeling of doom, of a tragedy written on the waves. Pink writes with a furious intensity, evoking the sound and feel of the storm, so that we are swept up in its fearful rhythm.

The shape of the poem mirrors the storm, zigzagging across the page, cropped at the end of the sentences with a capital letter at the beginning of a line like a new wave rising and breaking. I felt almost seasick reading it!

Pink captures the slap of the waves as they dash against the boat.

I am particularly drawn to books where poetry and images combine, where both carry equal weight. Pink obviously has a visual eye, which is why this book is a collaboration with the artist Daniel Goodwin. Goodwin’s stark energetic woodcuts add another dimension to the work. The only full page illustration takes inspiration from the title poem: against a black background, a storm of white scratches conjure up the ship lying on its side, obliterated before our eyes, while in the foreground a few dark figures stand with their backs to us, watching in numb unmoving silence.

The remaining illustrations are a series of details accompanying the other smaller poems in the collection and etched onto the bottom of the page. I was reminded of the work of Kathe Kollwitz and sure enough ,there is a poem entitled ‘Lamentation of Kathe Kollwitz’

There are perfect winter poems as with ’Breakfast with Birds 1934’:

This is inspired by the German painter Gabriele Múnter. German history and the anti-Nazi resistance movement is a recurring theme in this book as in ‘The White Rose’:

The collection offers tender moments too as in the lovely poem ‘Dancers’ which speaks in delicate words, beautifully framed and yet leaving us with the feeling that the storm is never far away.

All in all Wreck of the Jeanne Gougy is an assured collection from both poet and artist.