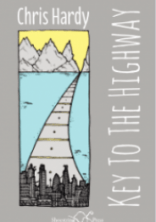 Chris Hardy is a poet of feelings and emotion and this is reflected in all of his published work. His writing goes from strength to strength and carries the reader along with a sense of anticipation as to where his poems will lead. He is a master in this technique that is often surprising but always fitting to the mood of each poem.

When reading Hardy’s work you seem to be walking a tightrope between your world and his and both can be entered into at any moment.

Every poem requires a second reading, at least, to understand the complexities of Hardy’s world and the depth of each poem. This is challenging as the poems cannot be read lightly and passed over quickly. But if we are prepared to read each poem a few times to unravel the complexity of thought it will prove rewarding to give them the time they deserve.

The book is profound but has the human touch as well. Each poem is never far away from an emotional pull towards one’s own self as well as the poem’s subject.

This image of ‘clear and free’ is the crux of the book for me. Hardy is a musician and song writer and this is apparent in the rhythm and musicality of his poems. His attention to the musicality of words is integral to the meaning of poems and this seems to free him to explore the issues he feels compelled to write about.

There is a variety of form in this book and Hardy has thought carefully about the form that suits each poem. He varies the work from long lines to short lines and between couplets and quatrains. This is one reason why the book is never dull. Furthermore the poems complement one another on the page. The titles are intriguing and urged me to read on from “The Wind Forgets, Always Forgets” to other titles such as “This Is Why” to “War Paint”. This last poem is very moving in an understated, quiet way that compelled me to re-read it:

Hardy’s strong points in his writing are fragility and vulnerability but often in disconcerting ways . The opening lines to “When It’s All Said And Done” are

This is a wonderful poem and, for me, one of Hardy’s best in this collection. But each poem is a journey and each reader will respond to poems in their own way, depending on what journey they want/need to be taken on at this time in their lives. This is the beauty of this book. The reader is invited into different situations and poems can be interpreted differently depending on the reader’s mood. This is good poetry. We don’t want to be told; we want to be led into our own thoughts. There is unease in some of these poems that reflects the world today. We do not live comfortably and poetry that reflects this back at us is much needed to help us understand situations we find ourselves and others in. We have to be able to walk in someone else’s shoes to be able to walk in our own.

There is a connection with the earth and soil as we are grounded into content which acknowledges that the planet and all it contains will survive our earthly existence. The title of this poem is contradictory in term of our existence as each of our lives is over in a flash.

Whatever humans do to destroy the planet some things will remain after our generation’s death. Thus, quoting again from “When It’s All Said And Done”, we have to consider the questions

“This Is Why” and “War Paint”, two very vivid and visual poems about the after-effects to individuals from World War 2, remind the reader of the human race’s inhumanity to one another. And what have we learnt from this war and other wars? Somewhere in the world, near to us, there is kindness. Sometimes we don’t need to look far for it.

I found the poems about Hardy’s father were the ones that gripped my attention particularly for their tenderness and insightfulness. Hardy is obviously a man entrenched in his family and family life and that is admirable. He takes us back to the basic animal connections that drive the human race forward.

This is a collection that leaves the reader with personal questions and much to think about. And that constitutes good poetry for any day, any era. These poems all speak for themselves, confidently and honestly about the plight of existence today with the most pertinent questions being asked. Thank you Chris Hardy and Shoestring for this book.