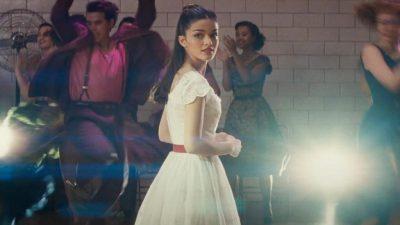 In the new West Side Story Leonard Bernstein’s magnificent music and Stephen Sondheim’s incisive and witty lyrics have all been preserved and bring as much pleasure as before.  The singing is as good and the choreography is fabulous, and that includes the movement of Spielberg’s camera which swoops and glides as if it is part of the company.  There is a stunning opening shot which rises from urban detritus to soar above the city and eventually caress a wrecking ball, and that sets up the underlying theme of the film.  Because in this update to the classic 1961 version the time frame – the late 1950’s – is the same, as are all the principal characters.  What updating means here is viewing the concerns of that time through a more precise 21st century prism.  “I’m going to think for myself,” says Maria pointedly.  Now, it is made clear, Maria does take Tony to bed, and here, having ‘a rocket in my pocket’ means, specifically, being capable of rape.  And here the minor character of Anybodys is unapologetically transgender.  The writer Tony Kushner has fleshed out the back stories of the main characters and provides a social and economic context for their behaviour.  That wrecking ball is preparing the way for the new Lincoln Centre which, ironically, was to provide venues for Bernstein to later conduct opera and classical music for the middle and upper classes, all on land previously inhabited by poor, unemployed Caucasians.  Thus slum clearance / gentrification, aspiration / hopelessness, immigration / xenophobia are the main pivots around which the story revolves.  But this fleshing out, to an extent, is a drawback because the over-long sections of expository dialogue deflate the film’s momentum.  We, the audience, want to get on to the next great musical number.  This film version adds only three minutes to that of 1961, but it drags somewhat and feels quite a lot longer.

The musical numbers are handled brilliantly.  Spielberg, the great visualiser, finds original and distinctive ways to render every song and dance.  America, the most energetic piece of all, has moved from night to day and from rooftop to street.  It is rendered beautifully.  And when Tony sings to Maria on the fire escape he appears to be floating above a dappled sea of optimism.  My one quibble is with Gee, Officer Krupke which is now sung by the Jets without Krupke present.  They have been left alone in the police station which seems too far-fetched.

There has always been a thread of sentimentality in Spielberg’s work.  Occasionally it has grown to a torrent and become overwhelming, as in the highly resistible War Horse.  But here it is exactly right; we are dealing with love.  Towards the end of the film a small additional plot strand brings us closer to Shakespeare’s original.

As Maria, Rachel Zegler is nigh-on perfect, and Ansel Elgort is a very passable Tony.  In the expanded part of Valentina, a Puerto Rican who had previously married a white, Rita Moreno provides an old-world sagacity with which to view the hyper-energetic passions and anger of the gangs.  Ariana DeBose as Anita and David Alvarez as Bernardo are both powerful.  That some of the more animated passages of dialogue are left in Spanish with no translation is to be applauded.  Commendably the actors do all their own singing.

Production design, costuming and cinematography are all excellent.  But the lifeblood of this piece will always be Bernstein’s brilliant score, ranging from jagged Stravinskian rhythms through cool New York jazz to the big heartfelt melodies.  Re-orchestrated by David Newman for smaller forces closer to those in the original Broadway show, and conducted by Venezuelan Gustavo Dudamel, we hear telling details as well as extraordinary power.  Despite its flaws, if this new film allows a great mid-twentieth century musical masterpiece to be appreciated by a new audience, it will be job well done.