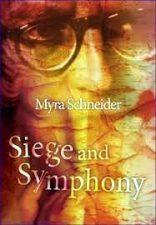 Siege and Symphony is Myra Schneider’s sixteenth collection which explores the climate crisis, threats to wildlife and green spaces. It also contains responses to artworks and a celebration of the human spirit. The book opens with ‘Resurgence’, which is inspired by watching workmen chop down a sycamore tree, taking four days to get to a stump which was then burnt and from the charred remains,

This is a reminder that even great trees start from small roots and implies that small changes can help make a big difference. The language shifts with the poem’s mood, the thin ‘spindly’ becomes a thicker ‘sturdy’ and becomes more certain as it moves to the last line. It’s a hopeful poem to start on. Less hopeful is ‘Becoming Plastic’, which begins

This embodies a strong suggestion the vitamins’ wrapping should be more human-friendly as well as eco-friendly. The poem ends with a dream (a grouper is an endangered fish),

Micro-plastics aren’t just a threat to marine life but also to the human food chain, an invisible part of the food and drink we use. In the dream, they end up encasing a baby and it’s left for the reader to decide whether it’s a protective casing or a shroud. Either way, the poem’s focus is on how something that became an everyday convenience and seemed to solve a lot of problems is now itself a problem that humans have to find a remedy for.

A tribute to a late friend who loved language, ‘Anne’s Words’ ends

It’s a touching tribute with a note of regret about things that weren’t said because the speaker wasn’t aware of the whole situation. A woman’s silence also lies at the heart of ‘The Real Mrs Beeton’ where research reveals Isabella Beeton compiled her advice from other books under the guidance of her husband, who was a publisher, and also suffered

Initially the poem appears to be dismissive of Mrs Beeton, a woman who’d never practised what she appeared to preach; but the list of lost children and the disclosure that she worked under the close eye of her husband (who continued to produce books in her name after her death) sees the poem switch sympathy towards her. All this work produced in her name never actually reveals anything personal about its supposed author. The knowledge she was merely a vessel for her husband brings a different perspective.

The final section, which gives the collection its title, focuses on Shostakovich’s Seventh Symphony performed in Leningrad (as St Petersburg was then) by an orchestra enfeebled by starvation. The situation is outlined in the opening part 1, ‘Leningrad 22 June 1941’, (where ‘he’ refers to Shostakovich)

Part of the sequence follows the story of the symphony and is interspersed with the poet’s listening and response to it e.g. in ‘London in 2016’,

Later, after a silence from which a flute starts,

Part 15 ‘Leningrad July-August 1942’, sees the hall packed and the music relayed on speakers to a crowd gathered outside, Olga Kvade, an eighteen-year-old who was in the audience, is thinking of her late father,

There’s an irony at play: the music that unites its audience is being played during a war. The enemy can hear it too. The poem asks readers to think about the conflicting emotions and how humans have both the capacity to recreate and destroy.

Although the final sequence seems very different from the preceding poems, which are largely personal or use a personal response to a piece of artwork as an inspiration, it actually encapsulates the themes throughout the collection. Myra Schneider makes us aware of the capacity for humans either to unite and create communities or else to tear them down. It’s an apt collection for these times where humanity can save itself or let the climate crisis destroy it. Myra Schneider writes with compassion, urging readers to think about the consequences of their actions.