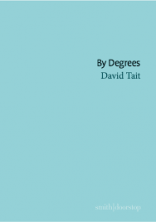 Poetry review – BY DEGREES: Carole Bromley is confident that David Tait’s pandemic poems will stand the test of time

At the start of the pandemic when we in this country didn’t actually believe Covid 19 would spread to our shores, David Tait began posting on Facebook the most remarkable, chilling poems about the situation in Wuhan where he was living and teaching. I found them extraordinary and, obviously, given David’s talent and his unique insight into the unfolding situation, amazingly strong. Later, other poets would publish pandemic poems and a number of excellent anthologies emerged from the lockdown. For me, David Tait’s are still the best, so I was very pleased when Smith/Doorstop decided to bring out this pamphlet.

How is this for an arresting opening to the title poem “By Degrees”?

It is, we learn, a thermometer at the supermarket entrance, but the shock remains. The customers ‘are nervous to touch what others have touched’ and the shelves are almost empty. The poem ends

Reading it at the time the poem felt prophetic and there is a feeling of tension and foreboding which is subtly built up by phrases like ‘his eyes vacant’, ‘merriment/like a slap’. The poem which follows, “The Virus at My Window”, continues this undercurrent of threat as everyone pauses at ‘the mewling of an ambulance’ and breathes again when it goes past. People wear masks, walk slowly though winter smog.

We meet again government cover-ups and lies, the sad, desolate Skype funerals and then, in a particular favourite, “Candles”, the poet attempts to light a candle for each one of the dead but soon runs out of candles

There is something very powerful about the start of the pandemic here being foreseen and then observed by the poet living abroad; and references to ‘convenient truths’ which can kill, for instance, have an ominous ring to them. The poems become angrier and more political but always in a controlled way. I really admire the poet’s apparent restraint which makes his frustration at the government’s incompetence come across loud and clear. In “Get Well, Soon, Prime Minister” for example, the device of repeating Johnson’s title in mock deference emphasises the irony of tone and also is darkly humorous.

So, here is a poet who can make us laugh as well as think; and the pamphlet is all the stronger for its black humour. However, I also need to mention the lyrical beauty of some of the poems, “Nocturne” being a particularly fine example.

Above all, though, these are among the very few poems about the pandemic which will stand the test of time, which bear witness in both a political and a personal way to the tragic events which have touched all of us in some way. Buy it, read it, keep it. It’s a triumph.