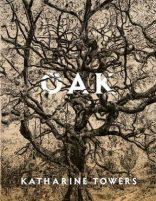 Poetry review – OAK: Edmund Prestwich is captivated by an imaginative poem-biography of an oak tree by Katharine Towers

Limpid and beautifully paced, Katharine Towers’ Oak draws the reader on from line to line and page to page. There are no sharp breaks or difficulties to hold one up so it’s easy to read the whole book at a sitting. Essentially it is a single poem, developing the life-story of one oak through seven sections corresponding to the seven ages of man in Jacques’ famous speech in Shakespeare’s As You Like It. However, there’s a qualification to this singleness. Several times, a few lines sit in the middle of a page, looking like a separate item, offering all the aesthetic satisfaction of a complete short poem and surely destined to be anthologized as such, even when they’re also smoothly continuous with what precedes or follows them. There’s barely any punctuation in the book, just apostrophes, the odd pair of brackets, and a few capitals for names. This facilitates the hovering of such short passages between self-sufficiency and participation in a continuous flow. An example might be the four lines on page 54,

Although a delightful little poem in itself, that both continues the previous page’s listing of visitors to the tree (echoing its ‘here is …and here are’) and is picked up in turn by the next page: ‘Woodpecker is a much better kept secret’. The effect is like a cine camera roaming over the tree in a continuous take: the shutter doesn’t close, but the camera’s eye pauses on some images.

Although the book is so easily taken in a single bite, delight grows with every revisiting and every meditation on an individual passage. Take the oak’s first emergence:

Everything here slips down easily, but there’s a great deal going on. Sharing the diminutive ‘-ling’ creates a natural link between the notion of a suspicion or hint – an ‘inkling’ – and the seedling latent in the acorn. The mystery of a plant’s genetic programming is related both to child development, and to the indescribable but intensely felt sensations of the first vague dawning of an idea. Then we have the vivid simplicity of ‘far from the green skirts of the wood’ – ‘skirts’ as ‘an outlying part or area; a border; a boundary; a verge’. That’s lovely because the slightly old-fashioned, literary flavour of the phrase seems to reach back through time, as mature trees do. Moreover, the literal image carries a penumbra of metaphorical suggestions – in the sense of ‘The lower part of a dress, gown, robe, etc.’ it makes one think of the wood as a mother from whom the acorn child is escaping. Similarly, there’s a fast-moving radiance of suggestions in the phrase ‘can’t contain itself’ – a delightfully comic image of an excited child glitters off the serious idea of something that is paradoxically more than itself. A few lines on, the inkling or genetic programming solidifies into the beginnings of root and shoot:

I find these lines magically sensitive and alive. Out of mystery grows a visually vivid image, bringing together memories of watching a snail’s foot emerge from its shell and of speeded-up films of plant growth. From another angle, going back to the idea of pursuing the thought of a thought, it feels almost as if I myself become the seedling, groping through the dark, wavering and quivering. The intentness of the description makes for an utterly absorbing imaginative effect, filled with an almost religious sense of tenderness and wonder. What T S Eliot called the ‘auditory imagination’ is very much at work, though ‘auditory’ is a slight misnomer in that it’s less to do with what one hears or imagines oneself hearing than with what it’s like to say the words: the wavering and quivering seem to be there in the movement of the lines even before one reaches the actual words ‘wavering’ and ‘quivering’.

What used to be called the ‘pathetic fallacy’ – attributing human feelings to non-sentient phenomena – has made a welcome return in much recent poetry. The fundamental idea of Oak – presenting the story of a tree in terms of the seven ages of man – means that it naturally suffuses this book. Towers handles it with striking tact and skill, sometimes in the relatively oblique ways I’ve illustrated, often as directly as in

The aliveness of her metaphors means that they work both ways, as metaphors and similes do in Shakespeare. Describing the oak in the fourth phase of its life, comparing it to a soldier, she writes:

Obviously enough, that leads from the oak to the soldier and I would say that in doing so it doesn’t just tell us something we know about victims of post traumatic stress but also asks us to think about their condition in terms of deep natural processes. A very wide range of human life and activity is evoked through the book, not just the broad titular categories of infant, schoolboy, lover, soldier, justice, pantaloon and old man. I started by thinking of these human comparisons as essentially ways of illuminating the life of the oak. Now I think it’s as much the other way round; that the poet is using the oak to talk about us.

She does so in a way that’s grave and playful at the same time. This is perhaps another link with Shakespeare, and a difference from Hughes and Oswald, to both of whom she seems to me to owe much in her handling of rhythms and the easy inclusiveness of her language. A tiny example of the sparkling between wit and seriousness would be her description of the oak as a ‘long book’, which is funny in the physical comparison it prompts in the imagination, but leads to serious thought about how the whole life story of the oak, the weather conditions it’s lived through, its attack by parasites and so on, is written in its wood. A more profound one appears in her handling of religious associations. There’s a brief apocalyptic burst of specifically religious reference at the beginning of section 7:

Otherwise there’s not much of an explicit kind, though the whole book seems to me to suggest a religious reverence for life. I think this feeling makes itself felt more deeply by being a kind of shimmer around the edges of what’s said and the way it’s said, rather than being voiced directly, and in particular by being suggested in a playful, equivocal way. For example, in section 3, ‘The Lover’, there’s a page headed ‘regarding the first true love of an oak / which is light’. The poem starts with a botanical fact, presented by means of a humorous comparison to a lover’s obsessive talking about his beloved: ‘a tree will always mention the sun / in its manner of growing’. It ends

There’s a delighted twinkling between religious and secular associations as the line of thought drops from the exaltation of ‘making of the sun a god’ to the comic anticlimax of ‘worshipful company’ (suggesting the titles of livery companies like ‘the Worshipful Company of Butchers’) only to soar up again as ‘worshipful’ and ‘company’ reassert themselves as meaningful in their own right, making us think of reverend congregations, and also bringing companionship to relieve loneliness. It’s a lovely celebration of creative power, one of many in the book.

Towers’ handling of this final phase of life has a transformative richness and two-handedness. She picks up Jacques’ word ‘strange’ changing its tone from sardonic mockery to wonder:

Two-handedness involves balancing continuing celebration with pathos, but even in the pathos there’s joy in the brilliance of the language –

The whole section unfolds through a series of hauntingly beautiful images but I want to turn to its very end. The penultimate page involves a last paradoxical assertion and denial of consciousness in the oak. First, at the top, there are these three lines:

then, after a wide white emptiness, these three

and finally, on the next page, in italics,

The spacing of the lines on the page and between the pages is an example of how beautifully Oak is constructed as a physical book (I just wish it had been made of more durable materials). Carefully weighed words are given unusual breathing space, and silent emphasis. Thoughts grow in this space, and different tonal possibilities demand their place in one’s mental voicing of the lines. The lingering last years, for example, can be read as a cause of wondering joy or a twisting of the knife through prolonged suffering. And in an almost unpunctuated book, those sudden capitals blaze off the page. They make Light, Air and Rain almost into gods. At the same time, the lines say that these gods depend for their meaning on the living things that depend on them. It’s a final suggestion of the ecological idea of mutual dependence and support that runs through the whole book.