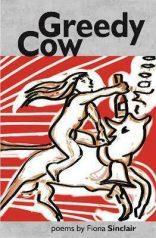 Fiona Sinclair is the author of seven collections, including Dirty Laundry, A Game of Hide and Seek, Wonderland, Ladies Who Lunch, and A Talent for Hats; she was also the editor of the excellent online poetry magazine, Message in a Bottle, although this seems to have folded, which is a great shame. In this new collection she revisits one of the themes of her 2019 book, The Time Travellers’ Picnic, namely her late-in-life romance with a loveable crombie-wearing biker, based on her real-life husband Kim. While it reprints some of the poems from that earlier book, this one focuses on the genesis and development of their romance, from the early stages of online dating, through the inevitable uncertainties and adjustments associated with serious relationships, to what feels like an unequivocally happy ending.

The book opens with ‘Internet Dating’, a poem which demonstrates Sinclair’s realism and humour as well as anything in the book:

Eventually she finds someone who can make ‘the great gear change up to seduction’, and successful meetings progress through first and second dates, awkward sexual overtures, and a gradual deepening of understanding. We discover more about the speaker and her lover in poems that mix candour with an impressive flair for specific detail. We get glimpses of her new man in his youth, for instance, as the pair trawl through old photographs in ‘Regeneration’, which reveal his ‘slicked back mullet and Zapata moustache’. We learn about his status as a ‘dandy’, in poems like ‘Double Life’, which also alludes to his dubious former life as a mod-toppling rocker, sporting ‘‘must have’ Kangol helmet, / full visor slapped down like a knight into battle’. In some ways the new man is an incongruous match for the poetry-loving English teacher, but she is willing to make concessions, and eventually finds herself ‘adding his name to [her] rent book’ in a piece called ‘A month’s trial…’ S

inclair isn’t squeamish about revealing the difficulties they encountered: suspicions over fidelity, disappointments born of miserly Christmas gifts, all qualify her impression of her lover, but his boyish joie de vivre wins her over, and us too, as poem after poem unpacks his engaging character in three vivid dimensions. Among my favourite pieces are those that deal with his passion for motorbikes, and his decision to make what at first seems like a reckless investment in a new machine. ‘Rush’ opens

The investment is emotional as well as financial, and initially she feels she’s in a three-way relationship, as suggested in ‘Ménage’, where following his purchase she tells us ‘I know that I have competition on my hands’; friends are sceptical too in ‘A chorus of disapproval’, where they ‘shake their heads, take in breaths’ and offer ‘shuddered anecdotes of broken bodies and worse’. But the joy of the book is our sense of the positive impact they’ve had on each other’s lives: the bike becomes symbolic of this, and the author’s willingness to embrace the places it might take them both – ‘I dare myself to outstretch arms, then squeal as you join me, / and we motor along in bird flight simulation’.

Sinclair’s poems are funny, lucid, and completely convincing. She writes with nous, warmth, and emotional acumen, and it’s a delight to share these succinct, charming dispatches from the front line of her exciting new life.