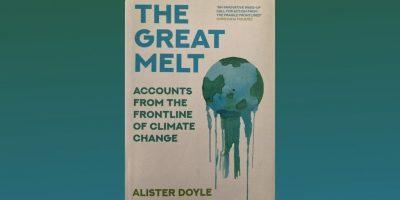 My only churlish quibble with Alister Doyle’s highly readable distillation of years of meticulous research into climate change and sea level rise is that it might make the reader desperate for the kind of far-flung adventures we can no longer undertake lightly.

A roving correspondent for international news agency Reuters for decades, including 15 years covering the environment, Doyle explores the impact of global warming from sinking Fiji to the disappearing ice of Antarctica to the crumbling Norfolk coast.  In so doing, he makes his own an emerging genre: the thinking person’s travelogue with a conscience informed by an iron grip on the facts.

Doyle tells us he offset the emissions of his flights and, through his series of rich and compassionate narratives, he inspires us to do the same should we dare to fly anywhere.

Each takes us into the complex reality beyond the headline statement that the increasing levels of carbon in the atmosphere mean rising sea levels, as well as extreme weather events.  What for many of us are unimaginable abstractions too easy to dismiss, Doyle makes vivid and pressing.

One of the examples that at last gets the attention it deserves is the plight of the Banabans in the Pacific.  Ruthless British phosphate mining left their island uninhabitable, compounded by Japanese occupation in World War Two.  Britain, then the colonial power, ruthlessly relocated them to Rabi, about 2,000 kilometres from Banaba in Fiji’s far north.

For the most part, it’s an instance of precisely how not to treat people whose homeland can no longer be home.  Leaders need to take heed as they consider what to do as parts of Fiji and other island nations face an existential threat.

Doyle guides us through the legal and cultural intricacies as people such as the Banabans risk losing not just their homes, but their identity, the means to earn a living and even their native language.

Some are turning to the courts as they battle to fight the many injustices – not least that those forced to leave their homes by rising sea levels have for the most part emitted almost none of the greenhouse gases that are to blame.