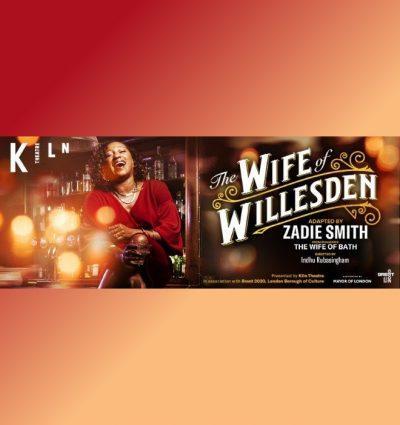 The Wife of Willesden

Zadie Smith’s brilliant adaptation of ‘The Wife of Bath’ from Geoffrey Chaucer’s The Canterbury Tales triggers a rethinking of women’s roles in society.  Alvita, the wife of Willesden, leads the prologue, speaking aloud.  She tells the story of her marriages and engages in a thought-provoking rewriting of biblical stories about women.  Saint Paul’s words are quoted and reversed, emphasising diversity: not all women are the same and different people might have different feelings.  Alvita suggests that the saint’s words are pieces of advice rather than laws.  The story is set in a pub in Kilburn, Brent, similarly to in Chaucer’s story, where the characters meet at The Tabard Inn.  Zadie Smith grew up in Brent, a multicultural area where more than a hundred languages are spoken.  Diversity is therefore celebrated in the story of this controversial woman who is compared to Chaucer’s character Alyson.  She is not a traditional princess, saint or prostitute but a middle-class woman who has married five times and who enjoys sex and worldly pleasures; she honestly expresses her strong will but also reveals the domestic abuses she has suffered.  As Zadie Smith remarks, she has always been attracted to Alyson, whose voice is ‘brash, honest, cheeky, salacious, outrageous [and] unapologetic’; she says she is Alvita’s ‘half-sister’.

In the play, ten actors play forty-six characters, changing costumes and accents and conveying the fun and ordinariness of common stories.  However, Alvita is not an ordinary woman; her language is sharp and her voice and gestures are appealing and entertaining.  She speaks the power of her body through her body and enthrals the audience with her truthfulness, cracking puns and telling dramatic stories.  She is superbly interpreted by Clare Perkins, who plays the part with energy and brio.  Alvita is not only entertaining, but her character also traces a journey of self-awareness in which she expresses herself freely and shamelessly.  She makes things up, lies to her husbands and lovers, and puts on a show for them so that she can control them, as their bodies are her ‘playground’.

Sexual undertones unfold throughout the play with a relentless, mesmerising vitality that also includes dramatic moments, with fights and episodes of domestic violence and rape that echo Chaucer’s story.  It is astounding how many of the themes of The Canterbury Tales, written in the late 1380s, are still relevant today.  The tale of the wife of Willesden is set in Jamaica and follows the plot of the story of the wife of Bath.  It features a young Maroon who rapes a girl he is in love with but who does not return his love.  He is sentenced to death but Queen Nanny suspends the sentence and declares she will save his life if he discovers what women really want.  The young man starts his journey by asking the women he encounters about their desires and finally solves the riddle with the help of an elderly lady he has to marry eventually against his will, which is a punishment of sorts.  The ending seems happy as he has learned to appreciate and maybe love his wife in the meantime.

Songs and occasional dances break the rhythm of Smith’s riveting verses and, together with the striking humour, make the performance highly entertaining in a cabaret setting, an inclusive atmosphere where creativity and transformation speak multiple voices.  The parallels with Chaucer’s story are numerous and multifaceted.  However, the versatility of the play and the vitality of the show enhance the themes in a modern perspective, injecting exuberance and joy into the old story and capturing the audience in the magical circle of the show.