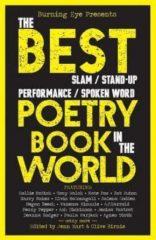 Something happened to Poetry over the last forty years. There was a time when performance Poetry was a poor relation to the high brow stuff. Back then, those who dared to submit to the better magazines had to submit to their rules and sensibilities. Burning Eye is a publisher that has given performance poetry a print platform.

The Best Poetry Book in the World collects popular poems from a wide selection of established performance poets. It is a celebration of Burning Eye’s 5th birthday (now long past). I would suggest that this book is a fascinating historical document that preceded the newer inclusivity of voice in poetry. Burning Eye gave debuts to poets including Holly Mcnish, Tony Walsh, and Selena Godden, who are all now established and respected.

I expect one day there will be the: Penguin book of Slam Poets, Cambridge Guide to Twenty-first century Slam Poetry, The Oxford Anthology of Early English Slam Poetry or similar books; this is the nature of poetry, and from a literary perspective, slam poetry is a counter-movement to conservatism and a culmination of the concept of individualism and accessible language.

This anthology unapologetically aims to bring together ‘the anthems, the foot stompers, finger clickers, belly laughing crowd-pleasers under one cover’, and it has certainly offered some triumphant introductions to poets. The thing I most admire about Burning Eye is that they declare themselves unintentionally mainstream. There are some glorious moments of alternative poetry in this collection. I admire what it stands for and that it captures an authentic, unrestricted voice that captured a prelude to the modern age of poetic inclusivity and equal representation. I certainly admire any self made-movement that has made poetry accessible, appealing and most importantly: free to rhyme.

If your politics are unquestionably left in outlook, then this is likely to be an utterly agreeable collection. If you know a staunch conservative or Daily Mail Reader, then this may be a disagreeable read. The poems cover race, poverty, austerity, identity, sexuality and feminism. I thought the best poems here were ones that tackled more significant universal subjects in an array of intelligent ways. I particularly liked Matt Panesh’s “Tea” that I cannot quote without spoiling it.

Luv Torc’s “Notes from a Small Island” brilliantly and informatively reflects on the experience of being 38 weeks pregnant.

Do not let this simple beginning fool you; It is an unflinching, cliché-slaying, uncompromising, uncomfortable rollercoaster of the lesser discussed pregnancy issues, including ‘pubes’ and Anusol tubes. Unabashed and apologetic is a fitting description for much of the poetry in display in this collection.

There is an overwhelming openness and honesty to the poems. This is what popular, cross-cultural engaging slam poetry looks like when you strip it of its poet/performer and audience. Burning Eye intended to publish poets from ‘all ends and angles of the movement’. I concluded that this book is a fascinating historical document: both as a record of a self-made literary movement and as a record of modern English attitudes. Below the performance and accessible language, these poems are sincere and often profound. Like so many small presses, Burning Eye has been impacted by COVID, they recently have requested help and for book sales on social media. This book shows why the literary world needs the small presses. I hope the world can show small presses that it needs them too.