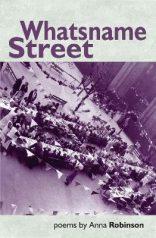 In Whatsname Street Anna Robinson takes an in-depth look at life in Lambeth in the first half of the twentieth century, long before gentrification pushed house prices in the area towards the million pound mark.

The collection is a glorious mix of styles. Robinson renders the speech of some of the residents in their own vernacular. Other poems give a more conventional voice to residents and there are several prose poems about the estate itself, and the shortcomings of the landlords. What comes across most strongly is the raw energy and vitality of the area, and of residents’ struggles, not only with poverty, but also with the cheek by jowl communal life, and their fellow residents.

In a number of vernacular poems, Robinson uses the symbol “|” to indicate the glottal stop that is part of London speech. “Ta||ered” (which signifies “tattered”) takes a view through the curtains into a neighbour’s front room from an unnamed observer who has clear ideas about how a housewife should keep her house:

There’s possibly a discussion to be had about whether the use of the vernacular adds to the poem, and Robinson does not use it consistently when she is imagining the residents’ speech. I found it worked well, adding an authenticity to the poems.

In other poems, Robinson tells stories in a more standard speech. In “All Our Little Chicks in a Row” she tells the story of Emma and Phyllis Chick who lived in the area from 1937 to 1939

Uncle George came to stay ‘smelling of wintergreen’ while the sisters worked sewing lace for a wedding dress, though who the dress is for is not revealed. The wedding day was good:

But this is 1939, and the girls find they are at war and disappear from the narrative.

“The Nightman” tells the story of the man tasked with collecting the nightsoil, coming late at night when:

Similarly, “Airbricks” picks up the poor housing conditions for many residents. The air bricks in this poem, ‘at least one I know of / in each room’ are essential for underfloor ventilation and to keep damp at bay, but there is a problem:

the results are not good:

Hope is pinned on the damp man coming to make all new at some unspecified time –‘please say he’ll come.’

The collection also includes a number of prose poems. “Miss Sunderland”, written in the vernacular, remembers the woman who ‘ran the ‘ole thing – she run the ‘ole estates.’ Miss Sunderland’s family were all builders, so she knew what needed to be done and would make sure she inspected the builders’ work before agreeing it was complete. She ‘climbed all the bleeding way up to the top, looked down into into the gutters’ She would make the builder join her on the roof and examine the gutter, scooping out the dirt. ‘You haven| finished this’ and made ‘them do i| all again before she would pay ‘em.’

Two other poems in this collection deserve special mention. The curious “Binless” has some of the appearance of a found poem – not a page of a document with blacked out sections, but a poem with gaps made with dashes. Each dash carries an endnote reference, picked up in detail in the Notes section. (I have been unable to replicate the endnote reference numbers in this review) The poem, as it stands on the page, has a poignancy, telling the story of someone who has lived on the estate, but apparently left no trace of himself when he left – perhaps died:

The notes, however, blend into a more lyrical memoir of the way the estate views the departed. Here are the full notes for the first line I quoted, with the words the notes referred to in bold:

There’s a dilemma here. A reader turning the page to the Notes loses all sense of the continuity of the poem – perhaps intentionally, as the lack of continuity of individual lives on the estate is part of the theme of the book. But this makes for a disjointed reading and perhaps having the notes on the same page as the poem might have made it clearer for the reader to follow.

Another poem that merits special mention is “Terry’s Haibun”, which is told over nine pages, which is about 14% of the page count, and higher as a proportion of the actual text. The haibun tells the story of eighty-six year old Terry, his family and his life on the estate. We learn about his parents and grandparents, his job as a docker and the routines of everyday life. Terry tells how the doors were never locked, and food was left on the table, but theft was unheard of. Tenancies were fragile. Failing to pay rent led to eviction and the workhouse. We also hear of Terry’s adventures in Milan (La Scala) and the other families that were neighbours at different times. Robinson punctuates the text with haiku to mark breaks between sections, a poetic paragraph break. In the paragraph about the milkman:

Whatsname Street is a refreshing collection, examining life in a small part of London over an extended period. It is rich with the stories and voices of residents. The variety of styles used by Robinson keeps the narrative fresh, and she is not afraid to challenge convention with different ways of giving her stories impact. I particularly like the way she has captured the history of the area through the voices of her cast of participants. Anyone who has grown up with experience of the poorer parts of our towns and cities, especially before the sixties, will recognise the lives of the characters in Robinson’s book. It is a great achievement to capture their voices for future generations.