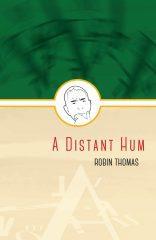 A man, deep in thought, squints out with a quizzical expression, from the front of Robin Thomas’s new poetry collection. What is it he is trying to fathom? Is the clue in the title, A Distant Hum?

The hum in question is hidden away at the end of one of poems, but other hums resonate below the surface, or perhaps are heard in the middle distance towards which our man is looking, giving us glimpses of a life lived so far. He is a man who loves art and jazz, trains, family. He is also a man who has reckoned with the atrocity of war — in which lives may be either lived courageously or else lost in a moment, as in the poem “Tomorrows”:

What happens next is that precarious hinge between life and death, luck, and fate. Something that perplexes Thomas is the compelling question what if? Like other poems in this fine collection, this one starts quietly and efficiently, but then delivers a sudden unsettling turn of phrase, like ‘gargoyled in his face’.

The opening poem, “The Lace Maker”, after the 1662 painting by Caspar Netscher:

So far, so good. Thomas has given us the description, but it is what follows that suddenly upsets the image. All is calm, except for the storm that has happened and thrown up the oyster shells…

Why dogs? This is such a strange, disquieting image. Thomas is good at this – he shows us what looks like calm and order, then suddenly a trap door opens – a very small, unexpected trapdoor – and the poem falls somewhere else.

Paintings feature a lot, as do various modes of transport, including trains. I loved “Afterlife”, a clever little ditty about the Flying Scotsman refurbished in 2016 and named Edward the Confessor.

Another train features in “Paper Train” which involves a more unsettling ride:

This is another thing Thomas is good at – using a narrator’s skill to pull us in, as if he was just leaning in to tell us a tale, his tone friendly and convivial.

But again, just as we are lulled into expecting something familiar and comfortable, the tone changes.

Here seems to be a constantly changing destination in these poems. I loved “Joao Gilberto in Rio” which is a poem that swells across the page like the Bossa Nova he describes.

There are also nods to other poets (from David Jones and Edward Thomas, to Carol Ann Duffy) and also to musicians and characters from history. But there is always a deep strand of personal experience and memory , as in an incredibly moving poem about his father “Over There”:

How lovely indeed. But the experience is fleeting. Important moments are often missed, like love, and buses:

There is a conclusion of sorts, although with Thomas it is more of a pause. Or maybe a bus stop.

he tells us – and more than that ‘Hang on for dear life!’ ‘We are trying ‘, I want to tell him. His quizzical face is still looks out, perplexed. ‘Yes, but what is it all about?’ he seems to be thinking. You won’t find any straightforward answers in this wonderful book, but you’ll have a fascinating journey – and listen out for that hum.