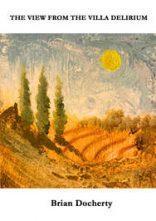 Brian Docherty’s poetry may be familiar from magazines but single poems are only an introduction to what a poet might achieve in a collection. It’s a good indicator, however, when a poet’s name stays in your mind over time; it’s a mix of that sense of commitment (both to poetry and to magazines) and the recognition that comes from being selected by a range of editors. The View from the Villa Delirium is Docherty’s eighth collection so there’s already a substantial body of work behind it. I’m glad I’ve had this opportunity to look into it more closely – and to enjoy it.

There’s a relaxed, sub-Beat tone to the poems and a consistently accessible style. In a short note on the back cover Martin Crucefix describes Docherty’s poems as ‘likeable’ and ‘companionable’ and that fits them exactly. He’s a poet who establishes a conversational relationship with his reader, as here, in the opening stanza of ‘A Place of Safety: after Cathy Bird, Fairfield Church’)

Three-line stanzas suit the rhythm of his voice; Two questions in one stanza; they could be addressed to a companion or be rhetorical, a gentle musing on animals and place and safety. After a two-stanza detour to consider the death of St Thomas à Becket, Docherty acknowledges ‘These sheep will be called to the knife one day’; in the meantime they have their time of peace

The poem feels immediate, so much in the open air, that it’s easy to miss that is an ekphrastic poem, as are many in this collection. Docherty takes art works as spring boards; his questions are a response and also a recall, drawing on his past and present life. We learn, as though in conversation, that he’s travelled widely and lived in the USA and that on arrival in any new place his first concern is to ‘… find a bar to enjoy/ the local wine and music with a new friend.’ (‘Losing Sight of the Shore’). Having left London, where he was a member of several writing workshops he now lives in East Sussex, in St Leonard’s. The land and sea feature in these poems almost as much as the local community. He’s a poet who looks outward, who shares the joy of writing.

Consistency of tone indicates that he writes quickly, needing to capture the thoughts and images around him rather than wrestle with the constraints of formal structures. The human generosity in the best of the Beat poets shapes a part of this; he offers the world kindness and not criticism. ‘On being taken for a Ming Vase’ opens with a half-rueful acknowledgement of ageing

He is ‘…used to giving up my seat on the Tube’ but has now reached that stage in life where he is the recipient of this ‘courtesy’ – a word that has dropped from common usage but which suits his style exactly. The final stanza could be a summing up of the ethos underpinning the whole collection:

I found this statement, straight-forward and simply-expressed, refreshing. There’s an honesty in Docherty’s writing, a kindness and openness to set against some of the less accessible and inward-looking collections currently being lauded. This is evident, too, when listening to Docherty’s measured reading of his own work. The launch of this collection is on YouTube where his introductions provide the notes that are missing from this book. If you follow this up, you’ll learn that he encountered many of the art works referenced here at Hasting Art Forum. This exhibition space is clearly important to him, as are the many writing groups which have provided him with prompts for these poems. He also refers to an epigraph, missing from ‘In the moment’, taken from the US poet Robert Duncan. Some poems have a wider reference and context and I wonder if other epigraphs have been omitted.

The title poem, ‘The View from the Villa Delirium’, takes Tangier in 1973 as its starting point—

The experience becomes tangible, shedding the Beat reference and tourists, when it starts to snow, a rare occurrence –‘…a special gift’ – exciting children who have never experienced real snow. The poem moves from Docherty’s vivid memory of that place and time to a widening out of how we record memory

Words have recorded the event better than a single image on a phone; they have drawn together street noise, music, American travellers of all sorts, the larger geography and a gentle pantheism. There is a slightly surreal quality to the snow, another thread in Docherty’s poetry, which takes me back to the ekphrastic poems. A striking series of mermaid poems, after work by Dawn Timmins, give the shore around Hastings and St Leonard’s a magical realism when mermaids strike up relationships with local men. ‘Blue Day’ opens

The relationship is so close to any casual affair that it’s almost believable, taking place in the countryside before she has to be dropped off at Rock-a-Nore, the popular local beach. In ‘Marianne’ she’s riding pillion on a motorbike; in ‘Mermaid on the Beach’ she addresses a young man directly, on behalf of her sisters

It’s a collection easy to read at a sitting, gently reminding us how much we gain from the wider experience of different art forms as well as from other poets. St Leonard’s is lucky to have him.