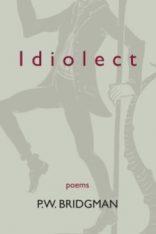 THE DIVERTED SELF: Business Class from this World to the Next. Andrew Parkin reviews PW Bridgman’s new collection IDIOLECT

“When can we return, if not to our better selves/ then to our diverted ones?” Theresa Pham-Carsillo poses the question in her poem “Haruspex” (Poetry, October 2021, p.6). To save the reader looking it up, as I had to, that curious word denotes a soothsayer of ancient Rome, perhaps an Etruscan, whose method was to examine entrails. Apart from that, however uncertain the future, entrails notwithstanding, the question remains, “when can we return” to our better or diverted selves? As a poet and a reader of poetry, my answer is that we return, when we needs must do so.

P.W. Bridgman’s book, Idiolect: poems, explores the adult experience, the diverted self, and even the irascible reaction to some of our moments. A good example occurs in “Badly Burned Mathematician Declines Prestigious Fermat Prize”. The poem ends with “he thought – perhaps irrationally? – sod the bloody Fermat.” Bridgman’s engagement with ordinary adult experience is never dull. The poetry is vital and relevant to us today.

Idiolect is divided into eight sections (The Unresolved; Some Fors and an After; Daftda; Albion; The Unlovely; Ekphrasis; The Others; Last Word + 1). Some Notes then follow. The first poem in the book is “Call and Response” with its light-hearted references to “Dr. Bird the ornithologist, /Or Dr. Angst the psychiatrist” but which in fact presents a chilling account of a patient in a hospital ward, where nurses are too busy (because, one thinks, almost inevitably the hospital is short-staffed): “…foolish to take this work, surely. Certain to fail.” The understated style of this volume draws me in and engages me in its concerns.

The mind behind the poems is agile. And, as we find in “Saint Stephen”, “the agile mind is an unruly horse”! The thought of an unruly horse made me evoke Shakespeare’s brilliant speech given to King Richard II when overthrown, in what people nowadays might call “a regime change”: “Down, down I come,/ like glistering Phaeton wanting the manage of unruly jades”.

This volume includes poems in prose as well as verse. One of the strengths of Bridgman’s prose poetry is that it can offer the reader apothegms such as his terse remark, “As conviction rises, so falls mere belief.” The precise balance of this sentence is a perfect example of one of the strengths of the prose poetry in this book. Furthermore, each paragraph in the prose poem “St. Stephen” ends with a rhyme. This gives the impression of a prose that is like some “unruly jade” (that phrase from Shakespeare) struggling to become verse! The balance of opposites becomes the structure of the poem “Sacred and Profane” when a lavatory at Heathrow Terminal 5 affords a setting for a canned music version of Allegri’s “Miserere”. Such juxtapositions are the stuff of contemporary life, when we find: “the final notes obliterated, alas,/ by the harsh exhalations of a faraway hand-dryer.”

In “You Have a Visitor, Sir” I was pleased to come across “I am weary of Larkin’s whingeing” and delighted by the parrot that imitates the profanities of the lady who owns this garrulous African Grey Another strength of Bridgman’s poems is that they can stand in their own right sometimes as mini short stories, like “The Empty Chair Makes the Widow Cry , Etc.” This elegy proceeds with rhyming triplets until interrupted, two triplets before the end, by a quatrain made of two couplets. This interruption exemplifies the action of the poem, because it describes the barging in of the debt-collector. In contrast, “Howl YVR” (after Allen Ginsberg) is a brilliant and concise anatomy of a generation younger than that of the poet. When I read this poem, I scrawled a big YES in the margin! I particularly liked its list of howl motivations, “I have watched their thumbs dance nimbly across small, spectral screens at dinner parties and cello recitals, baptisms and AGMs, birthdays, first communions, bat mitzvahs, bar mitzvahs, security commission press conferences, weddings, anniversaries…private placement closings, wakes and funerals.”

Another of Bridgman’s strengths is his ability to adapt to his own purposes some previous poet’s manner. “Why the Ferryman’s Mum Will Never Be Queen” is a nonsense poem with a debt to Louis MacNeice. It begins with the glorious comic couplet: “It’s no go the ferryman’s hat, it’s no go his polka-dot wellies,/ All we want is a clean, clean ship and some food we can put in our bellies.” And the following couplet – MacNeice would surely have approved – exploits the correct pronunciation of an Irish placename to good effect:

Bridgman also recalls elements of American society in, for example, a sequence about Miles Davis where he writes “I know how Miles comes in/ two beats early on the head out/ (and people say that/ the USA has no culture).” In “Maybe It’s Time to Start Smoking”, Bridgman, as a Canadian, pays homage to Al Purdy, referring to him (pace T.S. Eliot) as “il miglior fabbro”. The poem gives a likeable vignette of the poet “hunched over the keyboard” trying to write on a hot and humid night, when he is troubled by a persistent fly: “(God damn that fly!)” Hot and humid? He must have been back East, not in BC!

The book’s more than sixty poems followed by thirty notes are a welcome contribution to our reading. Bridgman is alert to everyday usages which reverberate, giving us more than a dictionary definition. In “Ode to Odean (On the Sale of the Haunted Bookshop) the word “dear” is explored in a way that we can relate to:

The first poem in the book evokes the hospital, its call and response system, and all its noisy annoyances, and the startling detail of a patient whose bladder is “shriveling like a dried fig”. The next poem, “Day 29”, begins with a surgeon and a dying man, before ending with the all-too-human remark.

We are, then, encountering the details of the everyday world, the one we ourselves live in, and this is managed without portentousness or pretentions. “The Conversation” between father and offspring is a powerful poem, at once truthful and sad. The book’s section named “The Unresolved” draws us into the poet’s and our own world, from which there is little chance of escape. In the next section, “Some Fors and an After” there are five poems. One that I found particularly effective was “All My Falling Women” a sequence of ten poems, each with an impressive presence evoked sometimes in relation to a specific very real place: “…that woman/ who tripped on the sidewalk/ on West 12th Avenue,/ not far past Arbutus.” The poet cannot protect those falling women, those numberless ones encountered in sleep, but remembering his mother, he realizes that “Her almost hand–beckoning, guiding –/will steady our ever descending footfall.”

Bridgman’s Idiolect offers in each of its nine sections poems with emotional depths but which are never overstated. Here is a poet to follow up on, a poet who has contributed quietly yet brilliantly to Canadian literature. But the poems reach beyond “our home and native land” because their concerns are always human, always significant, and therefore universal.