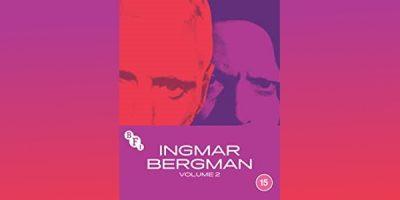 In the 1950’s we experience Ingmar Bergman’s gradual progression to full maturity as a filmmaker.  The culmination of that journey was internationally recognised in such (now) iconic films as Smiles of a Summer Night, Wild Strawberries and The Seventh Seal.

And with fame there eventually came homage, Swedish tourist attraction and pastiche.  Smiles’s brittle comedy of manners is transposed to Sondheim’s musical A Little Night Music; Wild Strawberries makes you forever associate that fruit with summers in a road movie country where the sun doesn’t set, and The Seventh Seal proves to be a potent allegory where death and his scythe are parodied by comedians as diverse as Woody Allen and the comedy duo French and Saunders.

Those masterpieces had their 50’s film critics, then more aware of great literature, laud Bergman as the Shakespeare of cinema.  Well maybe that’s so.  But doesn’t Bergman more naturally invoke comparison with the moral traps of Ibsen, the symbolism and class conflict of Strindberg and the witty self-deception of Moliere’s characters?  These were all playwrights that Bergman successfully produced on stage.

Bergman’s other 50’s films Summer Interlude, A Lesson in Love, Waiting Women, The Magician and Summer with Monika are equally fascinating though they were not labelled as being iconic with all the aesthetic responsibilities that that term implies.  A part exception being Summer With Monika with its still remembered landmark eroticism.

Consider The Magician (1958).  It’s a period film sent in 1846.  Dr. Volger (Max von Sydow) is a magician, with his troupe, undergoing a humiliating interrogation into their assumed theatrical fakery and charlatan healing practices.  The gothic switches back to the satiric in a film that’s intent at tearing off everybody’s deceptive face whether that of hypocritical authority or suspect entertainer.

There’s a beautifully lit horror sequence where an investigator is tormented by the furious Volger.  And for me the film’s best moment is when the troupe discovers an injured actor in the forest, who dies, comes back to life and describes to Volger the sensation of dying.  It’s so disturbing and eerily contained, taking place in the awful present moment.

The alternative title for The Magician is The Face which I find more appropriate given Bergman’s use of close-ups and how much the word ‘face’ is mentioned, with a mocking intensity, in the script.  Despite a certain existential hollowness of tone, The Magician is often haunting, disconcertingly funny and strangely, but pleasurably, hard to pin down.

Waiting Women concerns a group of women seated round a dinner table narrating stories about their partners and husbands that profoundly troubled or pleased them.  Of these three stories the best is the last about a husband and wife who when stuck in a lift reveal secrets of their extra-marital affairs both real and imaginary.  Actors Eva Dahlberg and Gunner Bjornstrand play out the scene with a ringing zest comparable to the feuding of Katherine Hepburn and Spencer Tracy.  Once rescued from the lift a tolerant and positive accommodation of their relationship is amicably reached.

In Lesson in Love we have Bergman come even closer to the antics of American screwball comedy.  The plot may be confused and the story rushed but the film is very funny.  Husband and wife David and Marianne (Eva Dahlberg and Gunner Bjornstrand reunited) pretend to be strangers in a train compartment.  And David is a real and distinguished gynaecologist.

With dialogue worthy of a Preston Sturges, unrestrained by the Hays Code, Lesson in Love proves irresistible.

Harriet Anderson was only eighteen when Bergman cast her in Summer with Monika.  He speaks of her being sensational: not just for her acting but for the sexual animalism she displayed.  Monica is an opportunistic working-class woman attracted to Harry (Lars Ekborg).  They give up their jobs, take a sailing boat and have an idyllic mid-summer relationship.  Monika gets pregnant.  They get married and she has a baby girl.  Soon their marriage becomes a hellish mess and Monika begins to sleep with other men.

The film’s early scenes have a neo-realist feel which is stylistically broken by one of the most audacious long held close-ups in cinema.  It’s of Monica in a bar, who turns to face us, the audience, and deliver a look that says don’t judge me for behaving badly for I want something better and I will damn well get it.  Don’t we all cheat and lie anyway?

That famous close-up went on to influence Godard and Truffaut who were great admirers of Bergman.  Summer with Monika is a marvellously sensual film where Bergman is greatly aided by the glistening photography of Gunnar Fischer.

Yet it’s Summer Interlude that deserves to be called a masterpiece.  Marie, a ballerina at the Royal Opera in Stockholm, recalls her first great love Henrick who died in an accident in the archipelago during a blissful summer holiday.  Depressed she re-reads her diary hoping to exorcise her past and begin a new relationship.

Summer Interlude is a tragic romance in which Bergman contrasts the world of nature, and the transience of life, against the closed-in world of ballet with its ‘fixed’ artifice.  Marie is rehearsing Tchaikovsky’s Swan Lake – a ballet concerned with doomed love.   Yet Bergman avoids any cliché symbolism of a dying swan kind.  Marie’s dancing has to be the means by which she comes to terms with her overlong held grief.  Through superb performances (especially Mai-Britt Nilsson as Marie) and a deeply sympathetic direction the film enables the assimilation of sorrow to be followed by the hope of authentic renewal.  Summer Interlude is tender, heart breaking and yet freed up to accept healing in a journey not from darkness to light but their constant intermingling.

No space left over to praise the greatness of Wild Strawberries, Smiles of a Summer Night and The Seventh Seal.  Yet they’ve already been written about voluminously and are so firmly established in the Bergman canon that for me the relatively less-appreciated films needed to take first place.  Films of near maturity.  Films of maturity.  All the Bergman films in this set are important.  And like the best of Jean Renoir exhibit a truthfulness to life over their brilliant craft.