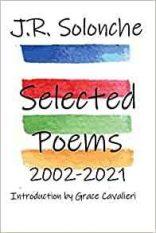 One of J.R.Solonche’s poems, called ‘March 14’, reads in its entirety as follows: “Today is / Einstein’s birthday. /The sun / is shining.” This baldness of utterance does little to persuade us that less is more. We are inevitably reminded of William Carlos Williams whose most famous poem is addressed in another piece by Solonche under the title of ‘That Red Wheelbarrow’. In some ways, for all his ambition to “tell the truth / without telling it slant”, he is very much a literary writer in the sense that much of his poetry is about reading, teaching, or writing poetry. He is aware of the accusation that he “writes too many poems about poetry” but laughs it off: “it’s what I know / about more than anything else”.

Reading him frequently brings other poets to mind. ‘The Black Birch’ reminds us of Robert Frost in manner and subject, but is without the subtle rhythms of Frost. Though his diction is remote from that of Thomas Gray, in ‘The Path’ he meditates, watching some boys play football, much as Gray once famously observed Eton scholars, concluding that “To know what will happen / never makes what happens easier”. This is not to say that Solonche is derivative: he is his own man enough not to sink beneath a literary heritage. He observes of John Ashbery’s work that it is “Where poetry goes when it wants to be alone”. This is not what his own poetry wants, however: His is conversational, presents a breezy often humorous persona, and is eager to communicate with its readers. In this he often succeeds, with a sometimes disarming simplicity.

Of ‘Main Street’ we are told that “It’s there, there, all here is there. / It’s where you go to be somewhere.” Nothing is too small to attract his notice: “What a pleasurable / perversity it is to sit / in the rocking chair / without rocking it.” He frequently indulges in paradox: of ‘The Bare Minimum’, he observes “At most, / it is / the least / you can do.” “In the house of the future”, he observes, “you will live like there is no tomorrow.” He can on occasion be hauntingly evocative, as in ‘Twilight’: “And the sound of the birds is not the sound of the birds only. / In the mouths of the birds is also the voice of the empty road.” Elsewhere he finds in “his favourite corduroy jacket” an emblem of mortality: “At least you have / all your buttons. You’re lucky,” he tells it, “although it’s true, one’s life / is hanging by a thread.” In ‘Purple’ he refers us to ancient Rome: “The emperors and empresses, / regardless of their cruelty, / looked good, looked wonderful in purple.”

And yet as one progresses through this over-generous volume one begins to be aware of Solonche’s limitations. There are too many cases when he tries to make poetry out of recalcitrant material. ‘I, Emily Dickinson’, a “found” poem, is a compilation of first lines from Dickinson’s poems – to no very obvious useful effect: it seems a rather pointless exercise, One indulgent critic sees him as “a philosopher in the mould of Wittgenstein”. But few poets make for convincing philosophers, and Solonche is surely no exception. In his monologue ‘Schopenhauer at the Englischer Hof’ the voice is not recognizably his own but neither does it sound convincingly like Schopenhauer’s. And indeed there are more serious shortcomings. In ‘The Feminist Poet’ (“And her nipples, aren’t they like the tips of ballpoint pens?”) and in ‘A Farm’ where a farm without a silo is likened to “a woman / without a man” we have less acuity of thought than somewhat antediluvian sexist attitudes. Some may find the persona of this poor boy from the Bronx made good less agreeable than it at first appears, may even detect a hint of smugness.

At his best Solonche displays a wealth of wit and invention. The problem is that (particularly in the latter part of this book) he is more and more rarely at his best. In his old age he has produced work at a furious rate – five books of poetry in 2019, no less than seven in 2020. This over-production inevitably means that there are more misses than hits, and there is a numbing sense of going over the same (or similar) ground. For a writer so fond of making judgements on poetry and what is needed to be a poet, who indeed has poems that comment on the virtues of his own poems, seemingly without irony, Solonche shows a marked lack of self-criticism in including in these Selected Poems so much that is of secondary worth. This inflated mammoth of a book would seem intended to announce the presence of a major poet. This it fails to do: the resultant bulk only makes it harder to ascertain the virtues of a minor one.