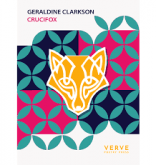 Geraldine Clarkson’s poems are irresistibly foxy. Wayward, intricate and often seeming to be consciously perplexing, they both question and revel in ideas about femininity, power, the human soul, and other wonders. Without missing a beat, she combines magic with acute realism, clever wordplay with ravenous desire. In ‘My spirit broke her fast on you’

In Crucifox, it’s a delight to encounter Clarkson’s mature poetic voice, unmistakable in every poem and yet covering an impressive range of moods and poetic forms within its 37 or so pages.

Throughout the collection there are glimpses of Clarkson’s own history – an Irish family, a variety of occupations including time spent in a silent monastic order. As in her earlier work, silences alternate with verbal exuberance, a joyous and barely controllable outpouring of a passionate inner life. The opening poem suggests a newly discovered source of ‘something else entirely.’

Something of the poet’s encounters with silence and devotional life lingers on in the appearance in the poems of priests, Virgins and a horrified Father Abbot (you’ll need to read the poem ‘Book of Blue’ to find out why). It occurs again, more poignantly, in poems such as the autumnal and meditative ’winding down’

Overwhelmingly, the women in these poems revel in agency. For instance in ‘éclat & cast lots’

As in many of the poems, the imagery captures and reimagines something familiar and perhaps slightly oldfashioned — a love story, a romantic encounter in a bourgeois garden. These are turned on their heads, becoming undercurrents in a quite different story.

I keep returning to ‘St Osburga’s Surprise’, too, a prose poem in which an Anglo-Saxon nun ‘sees’ the Coventry ring road in a vision, ‘Coventrated/re-created’, cause to ‘laugh and wonder.’

‘In Old Mr Spence’s Kitchen’ decay is presented as still life; a house-keeper’s take on a neglected kitchen, with shades of Miss Havisham perhaps, seamlessly combining disgust and beauty in ‘champagne flutes–with their mould-emeralded fruit-dregs’.

On the subject of housework and allied trades, ‘In Praise of the Office Cleaner’ is another marvel – original, subversive and affectionate. This cleaner’s subservience is only surface deep; Clarkson’s praise song endows her with fairytale super-powers.

Each page challenges and many shock the reader with surreal juxtapositions. The menacingly strange ‘Brood’ is the first poem I’ve encountered featuring vermin elimination, ‘daunting at first, then a thrill’, and descending into hints of domestic violence. In ‘Christmas Surgery’ there’s an encounter with a nurse who extracts from the narrator ‘a green streamer of pus, festive as muck, from my omphalos’. There are freewheeling sequences of wordplay and strange coinages. In ‘lemonjim hour: brittle england’, a manic muse is

In this and other poems in the collection, the poet seems word drunk, riffing on sound and rhythm, but is never in danger of descending into nonsense. I can’t always say what the lines refer to exactly, but the whole poem reeks of England. Clarkson’s surreal games, far from being fey or escapist, are founded on real and relevant concerns. ‘Bell-ringer’s knee’, for instance, ends with ‘the litterati and the chatterati and the arty-farty, all squeezed in, crouched in a semi-circle. All awaiting instructions from headquarters, and keen to proceed.’ Should we laugh, or shiver? The effect is both funny and unsettlingly sinister – all the more so for being both.

At the centre of the book, we meet the Crucifox, ‘more a state of mind than a particular creature or person’, according to the back cover blurb. Documents from the trial of a vixen, perhaps a murderess, are followed by two pages of crossword clues and solutions that merely pose more puzzles. Both narrative and language are playfully entertained, then called into question. Perhaps the whole collection is a puzzle whose solution I have yet to access (I’m a hopeful re-reader). Or perhaps Clarkson is more interested in unreliable narrations, and the seductive ways in which language can afford at best a temporary understanding. Either way, this is a sparkling and provocative pamphlet. The Crucifox, like other poetic foxes, is far too cunning to be pinned down.