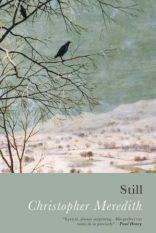 In this important year for Welsh publisher Seren, when they celebrate their forty years of producing beautiful books and see Amy Wack’s retirement after thirty years as poetry editor, they publish Still, the sixth poetry collection by one of their foremost and most prolific writers: Christopher Meredith.

Meredith is the award-winning writer of six volumes of thoughtful, poetic fiction including Shifts (1988), his examination of post-industrial Wales, now a Seren Classic. He writes mostly about Wales, usually in English, and has been a steelworker (for a year after graduation at British Steel where his father worked), schoolteacher, translator, critic and professor of creative writing at the University of South Wales. Born and brought up in Tredegar, he lives in Brecon and is now writing prolifically full-time.

Still builds on Meredith’s examination (in Brief Lives and Air Histories, for example) of paradox, particularly around memory and its tides, stasis and motion, and the complexity of stillness in art. He describes memories of high emotion particularly well, where memory holds frozen seconds like a series of still photographs. Do those memories record or shape our past?

The collection begins with ‘Moving picture’, witty even in its title, and sets out Meredith’s stall in the first lines:

These are complex poems that ask rather than answer questions and he queries how a slice of memory is selected from a life full of action to lie in our churning brains as if that moment happens continuously:

He asks if ‘what’s disliked/ is motion completed’, as if memory itself enjoys keeping us in a ‘journey always incomplete and moving still’. The first poem partners the next, the collection’s title poem, ‘Still’, which asks whether these slivers of disjointed memory are factually true or not. The poet describes a childhood, maybe toddler memory:

So far so vivid, with treasured details of ‘a hand that’s bossed and broad’ and ‘pinpoints of white stubble’. But the family say, and we all recognise this scenario, that it can’t be true: ‘You never saw him./ He couldn’t stand, and you were far too young.’ Memory insists that it happened and so does Meredith in these marvellous lines:

Memory depends on point of view of course and ‘A strife of ants’ cleverly unrolls what ‘locals’ on a hillside must have seen while a battle went on below ‘among trees or by their herds, / the keeneyed young perhaps describing/ what they saw to the older ones’. The language subverts the life and death stakes below:

With pikes, drums, ‘a tinsel of small flashes’, ‘a whiff of saltpetre, a reek of horse’, we are probably in the nineteenth century and mention of ‘six hundred tiny figures lying dead/mostly’ suggests that this might be Meredith’s pacifist answer to Tennyson’s Charge of the Light Brigade. The poem closes: ‘Something, it seems, had been decided.’

These poems are rarely political but in ‘Statues of Comedians’ either the poet himself or a character has plenty to say about statues. I did not expect a poem in this collection to make me laugh but this one did:

Shelley’s ‘Ozymandias’ comes to mind with the ‘sneer of cold command’ still firmly on its plinth. But comedians get statues too, even though ‘Their whole careers are /just seconds of vibrating air’. This poem disapproves. No statue can capture the strut of a comedian or the lightness of, say, Eric Morecambe’s dance and laments ‘the skill misspent/to kill the laugh bronze dead and miss the point.’

Towards the close of the collection is a section of stunning nature poems. Here is ‘Allt spring’ in its entirety:

Meredith is a fan of mirrored rhyme – lake, bark and brake below each other; tree and elegy mirroring too – which may be tricky to replicate here. But as ever in this collection, movement strides through all our efforts to capture stillness. ‘John Blight at The Land’s End’ introduces a warning with the voice of J. T. Blight, an author and engraver of the nineteenth century who tells us how he strove so hard to capture meticulous detail of his native Cornwall that to,

Blight spent the last forty years of his life in Bodmin Asylum.

The final poem is a gorgeous study of moments when time and nature seem to poise, ‘Winter woods’. Snowflakes:

Still’s mix of introspective memory, nature poems, holidays in Llandudno and quirky pieces gives the collection its own drive, unified by theme and Meredith’s technical mastery, and it’s a wonderful experience. Every time I look at a sea painting and a breaker seems to fold and fall, I reach for it again.

Rosie Johnston‘s four poetry books are published by Lapwing Publications in Belfast, most recently Six-Count Jive in 2019. Her poems have appeared The Phare, London Grip, Culture NI, FourxFour, The Honest Ulsterman, Mary Evans Picture Library’s Poems and Pictures blog, Words for the Wild and Fevers of the Mind. Her poetry is anthologised by Live Canon, Arlen House, OneWorld’s Places of Poetry anthology, Fevers of the Mind and American Writers Review. She reads her poetry widely, most recently at In-Words in Greenwich and the Gloucester Poetry Festival. www.rosiejohnstonwrites.com