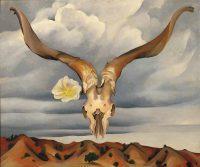 For those in any doubt, the first retrospective in Paris of Georgia O’Keeffe overwhelmingly makes the case that there is even more to the first woman artist to be taken seriously by critics, collectors and art museums than her gigantic sensual flowers.

Born in 1887 and brought up among the prairies of Wisconsin by farming parents, the wealth of biographical notes on her life tells us she had resolved to be an artist possibly when she was as young as 10 and certainly by the time she left high school and went to study in Chicago and New York.

In New York, she accomplished another early goal to exhibit at 291, the gallery founded by photographer Alfred Stieglitz at number 291 on New York’s Fifth Avenue that had taken a pioneering role in raising awareness of modern art in the United States by exhibiting the works of Rodin, Picasso, Matisse and Cezanne.

The gallery is the first focus of the Pompidou’s display of around 100 works from O’Keeffe’s output over her 98 years.  O’Keeffe found her work Special No. 15 on its walls after she asked a friend to give a series of charcoal drawings to Stieglitz.  The exhibition launched her career and a tumultuous personal and professional relationship with Stieglitz.

Lake George and its low-rise barns led to My Shanty and The Barns that recall O’Keeffe’s prairie upbringing.  While Stieglitz photographed them and considered “nothing could be grander,” O’Keeffe painted them, turning them into brooding, powerful presences, patiently enduring while New York’s dazzling skyscrapers shot up towards the sun and moon.

Distortions of size and our smallness in relation to the rhythms and abstractions of nature and the cosmos are a consistent theme.

In part, O’Keeffe’s magnified views were influenced by the photographers and their blow-up techniques; in part by the great heights of New York City.

They were at the very least bold, daring and menacing – nature as a force rather than gentle and decorative.  The Jimson weed, also known as devil’s snare or devil’s trumpet, has many properties from asthma treatment to recreational drug to poison.  O’Keeffe depicted it repeatedly and her Jimson Weed/White Flower No. 1 proved to be the most expensive painting created by a woman, sold for $44.4 million at Sotheby’s in 2014.

Believed to have originated in central America, O’Keeffe found Jimson Weed growing wild in New Mexico, which she established as her spiritual home and where the voluptuous flower paintings made way for depictions of the bleached bones she came across among the desert sands.

She painted the first pelvic bones in 1943, turning them into a symbol of the devastation associated with mankind and also the enduring cosmos.  The blue of the sky seen through the bones became for her “that Blue that will always be there as it is now after all man’s destruction is finished”.  The sentiment is as valid now as it was when World War raged.

She also stripped trees back to their skeletons.  The Chestnut Tree, painted in a warm autumn glow is leafless but latent.  Dead Cottonwood Tree is bone-white against a background of trees with living green leaves.

The natural sequel to the paring back to the underlying essence is the minimalism of O’Keeffe’s later years.

Winter Road 1 is a sweeping three-dimensional squiggle that manages to evoke a road cutting through the snow, while Road to the Ranch implies a river ribboning its way.

As throughout, O’Keeffe is remarkable for the clarity of her vision.

Her major contribution to 20th-century U.S.  art is proudly sponsored by Bank of America at the Pompidou Centre, with its vistas across the Paris skyline, around a century after some of Europe’s greatest artists established a French presence at gallery 291