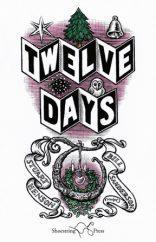 A perfect collaboration between the poet Stuart Henson and illustrator Bill Sanderson is presented in Twelve Days, ideal reading for Christmastime. It is a celebration of the season inspired by one of the richest periods of the year when dark and light alternate and merge in a kaleidoscope of sensations that range from death lingering in the cold weather and long dark nights to hope in the form of the birth of baby Jesus and the epiphany that brings new enlightenment to humanity. Greetings cards, carols and nursery rhymes inspire this collection as well, and each poem has a beautiful illuminated design of the initial letter by Sanderson.

The medium used in the illustrations is scraperboard, which is a cardboard panel covered with black china clay. The artist engraves the drawing on the panel using a scraper blade, exposing the white beneath the clay. This technique provides a sharp contrast between black and white and produces detailed pictures that can resemble wood engravings.

In their previous book produced in collaboration, Feast of Fools (Shoestring Press, 2015), the authors’ work was inspired by medieval misericords, that is, small wooden sculptures carved on the underside of a folding seat in a church choir. They can feature comical portraits, mythological and domestic animals, plants, and everyday or biblical scenes. Poems and illustrations in Feast of Fools are original and cheeky responses to the carvings, such as in ‘Vanitas’, ‘Toothache’ and ‘Tutivillus’. They expose our pretensions, failures, vulnerabilities and hopes.

There is a similar perspective in Twelve Days which explores more complex topics even though it maintains the playful tone of the previous collection in most of the poems. The illustrations are attractive and highly decorative and enhance the poems. They contribute to the ‘greetings cards’ quality that this collection aspires to: it is a gift and a message sent during this significant and precious time of the year. It is a time full of surprises that are reflected in nature:

We wait for the coming of salvation, asking ourselves: ‘Do we still believe Him?’ The central recurring image of the collection is therefore the nativity, which brings hope but also the awareness of our vulnerability in the image of a baby lying in a crib. This is what is eventually offered to our dreams and expectations. It is a small and simple thing that cannot guarantee any success or power whatsoever; on the contrary, it voices the most helpless and yet open side of humankind. It is ‘too small a peg you’d think/on which to hang/a whole world’s suffering’, but it is also ‘Lux perpetua/ burning in straw’. Thus, Henson interrogates the credibility of the nativity in these uncertain times. Nature is the place where human beings find their stories, where they can trace their journey:

We lose and find ourselves in the cold wintertime that can bring us peace and redemption but also death, the death of the soul. Henson warns us at the end of the collection that ‘the fields of the future [are] closed/like an uncut book’; the days to come are beyond an unsettling and unpredictable horizon. The collection is a thought-provoking sequence of poems that reads like Christmas cards but also questions and rethinks our concept of salvation in a human view. This view is double-edged; it is a source of renewal, saving and compassion but also a sharp observation of the pitfalls of our ephemeral condition.