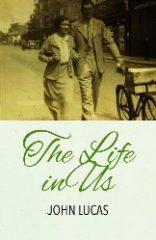 The Life in Us

Book Review – The Life in Us: Paul McDonald reviews an absorbing and touching novel by John Lucas

John Lucas will be familiar to some readers as the founder of Shoestring Press, one of the best independent poetry publishers around. Many will also know him as a poet, critic, essayist, memoirist, novelist, travel writer, and editor of numerous volumes that have appeared with impressive regularity over his long career as an academic. The indefatigable octogenarian shows no signs of slowing down, and in recent years he has focused increasingly on fiction, with all of his half-dozen novels published by another notable indie press, Greenwich Exchange. Their high production values are a match for the quality of the fiction in this welcome addition to Lucas’s burgeoning oeuvre.

The Life In Us is a period novel inspired by Lucas’s father – ‘an ordinary man’ who persevered in life despite ‘lost employment, financial hardship’ and ‘insecurity’. We first meet his fictional incarnation, Dan, as a child in 1918 Torquay, awestruck by his own father’s status as a wounded hero of the Great War. Dan’s sense of his own comparative ordinariness is compounded as the novel develops: he is outshone by his brainy older brother, Gerald, and, after his mother forbids him to pursue his flair for football, he spends years struggling to make a living as a salesman. Those struggles continue after his marriage to Jean, and the birth of their two children, Jimmy and Amy. The Depression, WWII, and postwar austerity provide the historical backdrop for Dan’s fluctuating fortunes in a story that stresses the impact of chance on its characters’ lives: while the institutions of family and religion offer occasional comfort, it’s chance that shapes their trajectory. Dan has his share of misfortune, including unemployment, insolvency, and illness, but serendipity sometimes saves the day in the form of fortuitous meetings with useful people, and even an unexpected legacy. Most importantly Dan endures in adversity, and his fortitude and strength of character redeem his ordinariness: the novel implies that perseverance itself is a form of heroism, a match for both his father’s war record and his brother’s social advancement.

The book has a rather subdued, social realist style, which might feel démodé in anything other than a period novel, but for me it’s a fitting complement to the mid-twentieth century cultural moment. The language feels appropriate, even as the novel shifts locations between Devon, London, and Coventry, progressing through the decades from the teens to the late seventies: Lucas has a good ear for the stock phrases of the era, right down to the characters’ corny jokes and clichéd banter. The social constraints of Dan’s world are similarly well-observed: he embraces the values of his day, both in terms of class and gender expectations. Certainly he doesn’t question his duty, either to his family or his country; he is troubled only by his ability to acquit himself well in the roles he has inherited. As a story of class struggle there are faint echoes of writers like Barstow, Braine, Sillitoe, and Storey, but Dan is rarely an ‘angry young man’; rather he is a committed and pragmatic one who learns to be philosophical about life’s vicissitudes, and reconciled to what he ultimately terms the ‘unimprovable, unalterable present’. In this sense the book is politically disengaged, focusing on the emotional lives of the characters and the traits that help them survive when fortune isn’t on their side.

At the end of the book Lucas includes an ‘Epilude’ offering an account of his own father’s final days, and it’s here that we first learn about Dan’s real life model. It’s debatable whether the novel needs this, and some would deem it superfluous, but for me it provides a pleasing, poignant insight into the story’s genesis, and the ‘ordinary’ character who becomes a hero, both in his own life and in this absorbing, intelligent, and touching novel.