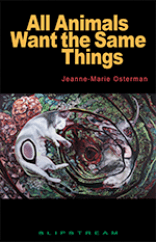 What is it that we all want? In the title poem of the 2021 Slipstream chapbook award winner, Jeanne-Marie Osterman writes about feeding her ill cat raw meat to revive her. It works! When the cat sees a mouse crossing the living room floor, she springs into action, stalks and cripples the mouse. (“Seeing the mouse brought my cat back to full health.”) It reminds Osterman of her sister’s slaughterhouse at the cattle farm, stunning the cow to bleed it out.

Are we fundamentally all predators? The dozen and a half poems in All Animals Want the Same Thing cover a wide span, from the conformist 1950’s, jobs in a paper mill, a strawberry farm, Brad’s Buffet, to the horrors of the pandemic year, 2020, in New York City.

Childhood is something of a jungle, the animals out establishing their turf. In “In the Mill” Osterman recalls a summer job in a paper mill, $8.75 per hour (“My ticket out of mill town”). A man looks away for a brief moment and loses four fingers to the cutting blade, blood all over (“he used his other hand / to hide his distorted mouth, / his shame….”). The atmosphere of violence continues in “Strawberry Picking,” and in the following poem, Miss Iris, head waitress at Brad’s Buffet, “sucking on a Lucky,” teaches more life lessons:

There’s always struggle, always give and take, an exchange of power. This is the 1950’s, when everyone is expected to obey certain rules and adopt accepted behaviors. The poem “In 1958,” more or less spells it out. A certain Mrs. Burkhardt wears the wrong clothes and her hair falls to her waist in a ponytail.

For shame! Mrs. Burkhardt finally finds her place in New York’s East Village, but conformity is yet another hammer to keep us in place.

“5-F” is a poem about the husband who left. (“Over dessert of blackberry pie, he said, / I don’t want to be married to you anymore.”) She begins to feel as though she “was living in a Warner Brothers cartoon.” Miss Iris’s prophecy comes true. Life’s a constant struggle to find balance.

Yet there are moments of humor in these poems. “Girdles” recounts her mother in 1959 struggling into hers like a deep sea diver donning scuba equipment (“dipping down / frog-leg-style / to get its crotch / lined up with her crotch”). “Communion” recalls adolescent rebellion which involved smoking cigarettes and drinking coffee behind the church. And later, in “This Smells Like My Vagina,” Osterman recalls working with Victoria Principal, the Dallas soap opera star, writing TV commercials about shampoo – years before Gwyneth Paltrow marketed candles with a different scent.

There are also some tender poems, “Requiem” and “Rugs,” recalling her late hardworking mother which express the same groping toward “want.”

So there’s no avoiding that ultimate question, what do we animals really want? Love? Comfort? Power? In that final poem, “White,” the one where she finds herself outside Lenox Hill Hospital, Osterman reflects about “the most beloved god,” the African god Obtala, who “doesn’t see humans as imperfect beings / who cause their own suffering.”

Do we yearn for perfection, then? Jeanne-Marie Osterman’s poems show us the most imperfect examples of humanity, as we bumble through life seeking those things that we blindly want, whatever they are.


London Grip Poetry Review – Neil Young The Life in Us