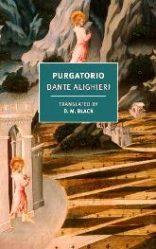 People who haven’t read Dante will find D. M. Black’s translation of Purgatorio a revelation. Those who know the Commedia already will find it a valuable addition to established versions.

The first thing to say is how vividly readable it is. Here’s how it starts:

By way of comparison, here are the same lines in Jean and Robert Hollander’s translation, published by Anchor Books:

What’s immediately obvious is how much more propulsive Black’s version is. His syntax doesn’t pause at line endings, it catapults us over them. This is in keeping with his emphasis on the soul’s active participation in the purgatorial process – not ‘is made’ but ‘makes itself’. In his note on the translation Black writes ‘I set myself the goal of getting as close as possible to the movement of Dante’s thought’, and ‘I have aimed more to imitate Dante’s continually onward-moving energy, both narrative and intellectual, than to imitate local sound effects’ (my italics).

He succeeds amply, throughout the book.

Readers will know that the Commedia is constructed in three sections or ‘cantiche’ (‘cantica’ in the singular) – Inferno, describing the hero’s descent into Hell under the guidance of the Roman poet Virgil, Purgatorio, describing his climb up the mountain of Purgatory on the other side of the earth, and Paradiso, describing his ascent through the various heavens to a final radiant vision of God. Though they’re parts of one amazingly unified whole – the Russian poet Mandelstam (in ‘Conversation about Dante’, translated by Jane Gary Harris and Constance Link) described the Commedia as a whole as a single crystal, a ‘thirteen-thousand-faceted form’– in some ways they’re very different, each rich in its own imaginative satisfactions. Clearly, it’s best to read the work as a whole, starting at the beginning. What often seems to happen, though, is that people read Inferno and get no further. I would suggest that if one is going to read only one cantica it’s emotionally far more satisfying to read Purgatorio than Inferno, and that Black’s translation would be excellent for the purpose. It’s true that Inferno is a work of extreme, wrenching dramatic power, and contains some of the Commedia’s most memorable episodes. It’s there that readers will find the peculiar sublimity of tragedy – episodes provoking intense pity and fear, leaving the sense of an irreconcilable conflict of values or sympathies rather than a satisfied sense of justice in operation. Vast though Dante’s hell is, though, it’s a place of darkness, claustrophobia, and, for everyone except Dante and Virgil themselves, of static, grinding hopelessness, spiritual aridity and hatred, where people are locked in their own worst selves without possibility of change or development and are cut off for eternity from any kind of goodness or love. (It is true that Paolo and Francesca may seem an exception but although they’re tied to each other for eternity, what strikes me in the way Dante presents them is that there’s absolutely no sign that the love that brought them together has survived in hell or brought them anything but enduring misery.) But hell is a place to be left behind, a negative prelude to the positive journey undertaken in the following cantiche. Purgatorio, in contrast, is above all a place of change and development, of active journeying up the mountain, not only for Dante himself but for all the souls he meets after he’s crossed the threshold into purgatory proper. (Beatrice herself is an exception, of course. Although Dante meets her in the Earthly Paradise at the top of the mountain of Purgatory, her own journey is complete and she is already enthroned in Heaven proper.)

Both first time readers plunging directly into Black’s Purgatorio and general readers who already know the Commedia reasonably well will find his annotation ample and clear without threatening to drown text in context. Moreover, he adds a stimulating and refreshing slant drawn from his own experience as a professional psychoanalyst. He writes in the Introduction, ‘what drew me initially to translate Purgatorio was a realization that Dante had achieved in his allegory a remarkably “psychological” way of thinking: a way of conveying conflict and development in the “soul” with quite extraordinary sensitivity.’ This emphatically doesn’t mean that he sees Dante’s characters as examples in a dance of bloodless psychoanalytic categories, however. Instead, it involves a heightened sensitivity to how their individual, concrete humanity shines through their allegorical purposes.

When he does leave the darkness and hatreds of Hell behind, Dante finds himself in a place of light and love. Although he and Virgil come to Purgatory at night, climbing out of the earth to ‘see the stars again’, as the last words of Inferno put it, this night seems almost another day:

In this strangely luminous night he sees four stars ‘unseen by any save the primal people’ – Adam and Eve – because we lost the Southern Hemisphere when they were expelled from Eden. When the guardian of the Mountain of Purgatory appears, the light of those stars falls on him as brightly as the sun. As Dante and Virgil climb the mountain, meeting many vividly presented people and hearing their stories, they pass through stages of purgation which on an abstract level can be seen as a ritual progression, accompanied by appropriate liturgical songs, but which Black’s notes help us see more clearly as processes of psychic healing. At night there can be no onward movement, but even then the atmosphere is peaceful and protected, not threatening. In this atmosphere of continuously benign mutual interest and support among souls who are all saved, are now incapable of committing evil and are all on the same path to God, there’s little room for actual conflict in the ‘present’ of the narrative. But the poem doesn’t go soft – Dante makes us shiver with horror and experience psychic tension not only by reminding us of the evils and sufferings of life in this world but by incorporating them into the experience of Purgatory in a way vividly expressed by Black’s translation. Seeing the souls of the envious, for example, Dante shrinks from the suffering that will cure them of their disease;

Sitting against the cliff face,

Their eyes are sewn shut with iron wire and Dante feels it’s indecent to look at these people who can’t look back. The emotional disturbance he feels at the sight is an example of the kind of inner conflict that remains for him and is part of his own process of psychic or spiritual growth as he climbs the mountain.

However, the most powerful, most poignant episodes of inner conflict come near the end. They relate to what for me is the emotional heart of the whole cantica, the parent-child relation between Dante and Virgil.

Dante’s journey begins at the start of Inferno when he finds himself lost in a dark wood and threatened by three terrifying allegorical beasts. He is saved by the appearance of Virgil’s soul. Virgil tells Dante that he himself is condemned to the outermost circle of hell where the souls of virtuous pagans must remain in sorrow and yearning for eternity because in their lives they lacked faith in Christ. However, he was visited by a weeping spirit from heaven, Dante’s dead beloved, Beatrice, who implored him to save Dante by bringing him down through Hell and up through Purgatory. She is asking him to give Dante something he himself can never have. The relationship between Dante and Virgil is developed with great sensitivity throughout Inferno and with particular and increasing tenderness in Purgatorio. It’s at the very heart of this great story. I think its absence from Paradiso is why I find Paradiso less moving than Purgatorio, for all the blazing power of its culmination. For me, the ending of their partnership is the true narrative climax of Purgatorio. It develops over four cantos.

First, on the terrace of lust, Dante himself must pass through fire after speaking to the souls of revered elder poets who address him from the flames. His terror when an angel calls him to be burned reminds us of two dreadful death penalties in the Florence of his time – burial alive for assassins, burning alive for a range of criminals (Dante himself, when exiled, was sentenced to be burned alive if he returned):

Virgil persuades him into and through the agony, telling him the fire can hurt but not harm him and that his fear of it is the last thing keeping him from Beatrice. At this point we feel most acutely how much Virgil is the loving father and Dante the child – Virgil encourages him ‘smiling like one who persuades a small boy with an apple.’

Knowing what is to follow, my eyes flood every time I read the conclusion of the canto in any version, including Black’s own. Summing up his own role in the poem Virgil fixes his eyes on Dante’s and says

Dante’s spiritual healing has been completed: his will is aligned with the will of God and can only draw him towards the good. The ‘lovely eyes’ that Virgil refers to are the eyes of Beatrice.

In the next canto, Dante explores the grass, flowers and trees of this beautiful place. He meets a nymph who tells him about the river he must cross to begin the journey beyond Earthly Paradise into the heavenly one. She says that perhaps when they wrote about the Golden Age ancient poets were dreaming of this place. In a moment of shared joy, Dante turns to Virgil at this and sees that he is smiling. Again, however, when you know what’s to come, the joy is laced with pain. In the next canto a huge, fantastical allegorical pageant appears. And in the next, at last, we both see Beatrice and lose Virgil:

Virgil and Dante aren’t actual father and son but has anyone dramatized the power and the limits of the relations between parent and child more devastatingly? Allegorically the moment may represent the way revelation trumps reason but that’s not how it feels to the reader, or, I’d suggest, how it felt to Dante as he wrote. The quietness with which Virgil withdraws when his work is done is almost unbearable. So is the fact that the words in which Dante expresses his recognition of his long-lost love, ‘I sense the presence of the ancient fire’ – ‘conosco i segni de l’antica fiamma’ in the original – are themselves quoted from Virgil’s own writing. ‘All our ancient mother lost’, of course, means Eden – the Earthly Paradise that Dante has about him now.

I’m riding two horses in this review, talking about features of the imaginative power of Dante’s Purgatorio that should come through in any decent translation and also trying to suggest the particular merit of Black’s version. I hope my quotations from his text will themselves show the energy, bite and sensitivity of his language as narrative verse in English. In terms of the commentary, I’ve already suggested the special value of Black’s psychoanalytical training and human sensitivity in suggesting new perspectives on character and motive. When it comes to scholarly framing, if I was focusing on an individual passage in depth, I might go to the translations by Robert and Jean Hollander or by Robert M. Durling and Ronald L. Martinez or to Anna Maria Chiavacci Leonardi’s Italian edition for more recherché historical and linguistic background. For continuous reading, though, I think Black’s translation strikes the ideal balance, giving ample context and commentary without overwhelming narrative momentum.

The Life in Us London Grip Poetry Review – Isabelle Baafi