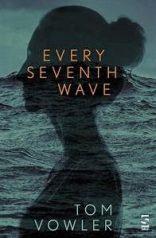 Tom Vowler’s timely and arresting Every Seventh Wave explores the complex and subterranean world of human trafficking amongst themes of culpability, loss and fraternal love. This is a novel about how chance encounters can have deep and irreversible fault lines and how lives can be altered simply by the direction of the waves that day. The story is set in a secluded coastal town and the lull and draw of the tides dictates who washes up in the waves and forms the brackish, dark setting for a narrative steeped in tension and intrigue.

The novel’s swiftly moving opening introduces readers to main protagonist, Hallam, whose unexpected rescue of Anca, a woman from Romania, with thick and thin stories to tell, sets the scene for retrospection: ‘He watched from an upstairs window as she entered the water.’ Anca becomes Hallam’s unlikely house guest and via a taut third-person narrative we embark on a crypt of histories. Hallam has returned to live in the coastal house where his parents raised him as a child with his older sibling; he is now a man deeply troubled by former demeanours; one who struggles to find serenity within himself.

Thematically speaking, the sea rushes through the novel with colossal elemental force. Water is never far from the novel’s main themes of morality and loss, the passage of water itself serving as both a mutual source of comfort and threat. The behaviour of water is likened to the insides of a woman: ‘Fighting it was the mistake, the battering and winding all the worse for it. Soon you couldn’t tell up from down, the sea a womb, your senses betraying you.’ Later, water serves as a presence in bleak times: ‘…no one was with him, to shepherd him. The sea perhaps, and he tried to hear it. The sea is with you.’ It carries characters in and out with it which lends Vowler’s narrative an overwhelming sense of the coincidental. When Hallam recalls his mother’s enchantment with the sea, the novel’s title emerges: ‘Cycles of seven, she said waves came in, the seventh the most powerful…’ and here, even the sea’s seemingly unpredictable movement gains some sort of mathematics, some sort of organic order of its own.

Vowler’s penetrating use of language enhances the familiar, particularly with landscape and nature. As a child out walking amidst a group of youths, Hallam stumbles across an adder: ‘…its dorsal patterning confusing the eye, as if it had no end or beginning. Just all middle. A prehistoric thing, it seemed to him, at once fascinating and unsettling, and for a moment they all stood in silence.’ Vowler deconstructs all the knowable characteristics of that snake down to its pattern, some ancient thing unknowable as a museum relic and we see how alien it really is: a half-finished story.

The exploration of death is painfully rendered by a similar sort of mineral excavation. When Hallam collects ashes at the crematorium: ‘he believed something remained of them, an elemental residue. Calcium. Carbon. Potassium. Matter even a furnace cannot break down.’ This reduction of human remains to their chemical components – phosphates which helped give former bones strength – is extraordinarily tender despite its science. Thinking on old times Hallam states: ‘Prison calcifies the heart’ and again, love gets reduced to elements as though emotion has an elemental composition which defies time.

Human trafficking is largely unseen, an underground violation of human rights and despite international attempts in recent years to tackle sexual exploitation cohesively, public awareness remains limited, and at worst, absent. Vowler’s novel is a deeply powerful vehicle for fostering social empathy and raising consciousness. Anya makes us bear witness to the unspeakable. We are positioned as voyeurs. Childhood toys are juxtaposed against her own bodily abuse: ‘She recalled a doll from childhood, how you could make its limbs achieve such implausible geometry, and she wondered why it had been made this way, legs that folded almost up to the ears.’ The innocence of that childhood doll with its pliant legs manipulated into inhumane positions forces readers to confront a violence and systemic abuse that causes deep unrest. It is necessary unrest. Vowler’s storytelling is a way into worlds many cannot know and illuminates that we all have a role in safeguarding.

Every Seventh Wave is a tenderly written and tense exploration of the shadowlands of the heart. Those on the margins of society are written sharply into lamp light and readers find themselves engaging with loss, betrayal and the complexities of lives lived out amongst the morally corrupt. This is a novel for now, a literary call for action as well as an unforgettable narrative bright with hope and redemption.