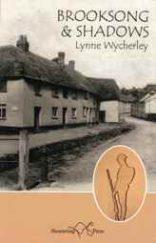 This new collection by Lynne Wycherley is made up of two quite separate, and rather different sections. The first, which bears the name of the collection, Brooksong & Shadows, focuses on the Devon village of Otterton during WW1, while the second part of the book is a series of poems focusing predominantly on the less unusual subject of nature.

It is a book of surprises: the first surprise, for this reader, was the focus on a particular small village, without any explanation as to why that village was chosen or even where it is. Presumably the choice of subject was because the village is well-known to the poet, but a note of introduction to the location might have been helpful for the general reader. The second surprise was that a contemporary poet should have written so much first world war poetry.

Neither of those reflections are criticisms. It is good when books bring surprises; and a further surprise, a delightful surprise in this case, was that I have rarely encountered such lyrical poetry. As the two parts of the book are so different, I’ll treat them separately.

Otterton, I discovered, is a small village in Devon; which explains why the poet employs so many delightful Devon dialect words. For instance, dimmet is the old Devon word for twilight, and there is a pleasing range of graphic local names of wild flowers, including, for example, gilt-y-cup (primrose), butter rose (buttercup), horse violet (heart’s ease), bellflower (eyebright) and peeweet (bluebell).

As though the charm of Devon words plus the lyrical beauty of the poetry were not enough, we are also treated to a feast of intelligent wordplay using all the resources of a wide-ranging vocabulary and a joyful playing with rhyme & half-rhyme.

One of Wycherley’s many memorable coinages is the ‘time-knurled hands’ that work at lace-making, which feels like a particularly successful kenning such as one finds in Anglo-Saxon poetry.

Like so much of the war poetry with which we are more familiar, this poetry also shines a critical light on the whole concept of war, and the tragedy that unfolds with grim regularity throughout history as humanity turns to this grisly dead-end of a way to address differences again and again, even after ‘the war to end all wars’.

There is nothing new about recognising that war affects people, particularly the combatants who are sent out on our behalf; but every now and then we are brought up short by the horror of what these ordinary young men endured:

Initially I wasn’t sure that the lists of names that the poet introduces – presumably the names of real people commemorated on the local war memorial – worked for me. Increasingly though, as I read on, these sections became slightly hypnotic, in the same way that some of Alice Oswald’s lists of names are. Maybe there are slightly too many names, though there is a pleasing sense that the poetry is giving the dead soldiers a final resting place by celebrating their memory.

Many of the poems are so beautiful that they almost hurt – not just because of the subject matter, but because of the exquisite language. In “Brooklime”, for instance, the poet looks up at the Milky Way:

Not only the Milky Way, but this poetry too, takes the breath away; and such a hymn to the beauty of the Milky Way conveniently moves us on into the poems of nature in the second half of the book.

Part 2: Path of the Dancing Hare.

Here there is a time shift from the First World War to 2021. And while the sombre subject matter of Part 1 kept the exuberance of the poetry in check to some extent, here Wycherley is at liberty to indulge in the most beautiful language and concepts of which she is capable, starting with the delicious first two lines of the first poem: ‘Time melts / on the lane’s tongue’.

There were some words which were new to me; for instance I had to look up ‘névé’ and ‘firn’, both of which turned out to be descriptions of types of glacier snow. It was worth discovering the meaning, because they occur in the following glorious description of etched glass on the doors of a church:

Sometimes such rich language is maintained all the way through a longer poem, as in “Hare on the Headland”, which moves swiftly and smoothly through sharply-defined images, using the whole range of a poet’s toolkit, such as rhythm, alliteration and assonance, half-rhyme and repetition. It is difficult to imagine a more striking picture of a hare.

In “Milk Parlour, Daybreak” Wycherley mimics the exact sound of a milking machine: ‘chug-ti, chug-ti, chug-ti.’ In other poems it is the visual that she captures, as in ‘your quantum drifts, / your questing eyes of sky’ to describe forget-me-nots.

Having heaped such praise on this book, it will come as no surprise that I am very pleased to have had the opportunity to read and relish Brooksong & Shadows. I recommend that anyone who loves good poetry and enjoys the richness of the English language also gets hold of a copy and revels in it.