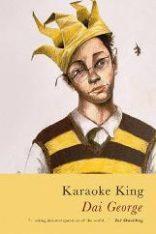 Anyone else who failed to follow up on a sometime passion for Bob Marley should get tuned back in to reggae, starting with Gregory Isaacs whose vocal tone has been somewhere described as one of ‘pained purity’. Dai George is a fan. He must have a good ear for a sibling soul.

The poems of George’s new collection, Karaoke King, are nothing less than transcendent. No tricksy stuff here. Just lucidity and formal grace; the words and the music. Their ability to move us to tears, to laughter, or contemplation of the mess we make of the world, and its extraordinary capacity for forgiveness, offering fresh opportunities for redemption.

Permeating the work is a profound preoccupation with love, embracing all colours, persuasions and proximities and patterned on the sacred. Extending from this is an exploration of lack, exile and exclusion: the plight of the outsider. And then comes the narrative of learning love, the trajectory from childhood towards some level of maturity… ‘when the Buldingsroman flops/exhausted on the other side of innocence’ (“Party Time”).

The opening poem of the book’s first section, “Doxology”, modelled on a prayer of thanks, describes the healing response to natural beauty constantly impinged upon and distorted by human anxiety: ‘Blessings flow, but trouble finds me/in the impasse after rain.’ How short is our attention span! How perversely we reject consolation, distract ourselves from quietude and gratitude by

A politician’s voice harries the poet, damning his lack of productivity while he wanders through “The Park in the Afternoon”:

And ominous, omnipresent, there is an awareness of climate change,

There’s a horrified recoil from present reality. ‘I have only ever lived among pollution. Tell me it is not the sky I look at but an irradiated blanket’, (“Universal Access”). George’s childhood world of ‘invented tribes…kaleidoscopic cultures’ has given way to ‘the promise of a never spent or perfected flux… ‘which keeps the poet tethered to the city. He feels the moorings slip; he must become a man, and in the world as it is now, “Far Enough Away”:

But he’s firmly on the road to redemption. Dylan Thomas boogies his way through “Karaoke King” and George takes up the baton and the beat from his wild Welsh forerunner: ‘Iambic I am,/real dolorous and rusty, and my chanson/brings the house down to an empty bar…

The threshold’s crossed in the collection’s second section, “From a History of Jamaican Music”; there are choices to be made on the way to manhood, nerves overcome, a voice to be found and heard…‘Songwriters will understand – the void/before a melody arrives, when breath/can’t seem to shape it’, (“Referendum Calypso”). But then he’s off, quoting Lloyd Bradley’s words from Bass Culture: When Reggae Was King… ‘the sound system had been created by and for Jamaica’s dispossessed’, and the poet declares ‘Which is where I first come in/feeling dispossessed somehow/at 18.’

Epiphany arrives on the “Bus to Skaville”… ‘An idiot weekend, balanced on my boyhood’s edge/like a pint of squash atop a mantelpiece.’ He’s upstairs on a northbound number 23 from town, nursing ‘a bootless thought for Ellie Glynn’ while downstairs it’s all ‘Dai caps, canes,/shopping for the week and summer coats’, and he plugs in his earbuds to blot it all out, tuning in to his newest acquisition… ‘Till now all songs have jangled through the unrequited treble’, but this disc, its burgundy box

Time’s up for Ellie and her kin, “People Rocksteady”:

From here the collection opens out into the wide world; poems pulsing with a universal sense of injury and injustice for the wounds we cause and bear, especially for victims of tyranny – the poor, the oppressed, those with the ‘wrong’ colour skin. In the measured prose poem “Soon Forward” – taking its title from a song by Gregory Isaacs – George describes his Welsh background and upbringing embracing close family and community ties, socialism and Amnesty International. It tells how his father helped a Kurdish asylum-seeker to fill in his claim form, but the application failed and they never heard from him again… Another Isaacs song gives George the words he needs: ‘You could say that home was as open as a door – a door you could nudge and step inside, if you knew it wasn’t locked.’

The formally fragmented “Or, A Windrush Interlude” is an agonised protest against white romanticism of Black ‘cool’: the excruciating demand that a ‘character’ in beanie and fingerless mittens on Blackstock Road provide a rendering of No Woman No Cry, when the only thing he’s received from woman that week is a ‘no’ to his citizenship claim.

A summer party, and in “Soon Forward”the poet watches someone put on the Isaacs track:

This last line just about the most tender, abject, shaming and memorable I’ve read on the entire subject.

“Party Time” an elegy for the Jamaican musician Slim Smith, leads most presciently into the third and final section of the book, ‘September’s Child’, where in “Sun Has Spoken”, the poet contemplates lost love. And lost innocence in “Poem in which my hairline recedes”, where Bruce Springsteen stars as the epitome of high attainment, having written Born to Run at the age of only 25…

America morphs world-stoppingly in “Post-historical Teatime” from the boyhood dream engendered by a ruby lounger on the pool in TV’s ‘neighbours neighbours’ and sleek silver aluminium tins of coke ‘stocked by Ben’s mum in her fridge’, when walking back from school he and his friend’s shared headphones are yanked off by another boy who tells them ‘some nutter nuked America/while we were still in period 6’. “New York Morning, Six Years On” takes a wry look at the metropolis ‘that turns routine commutes into a high/stakes hockey match’, where MoMA spits him out, hyperventilating, overdosed on postmodernism on Fifth,

The collection’s closing pastoral, “Pink Cones”, brings us back full circle… ‘The door will open on a different garden,/air more intimate and careful in its reach’.