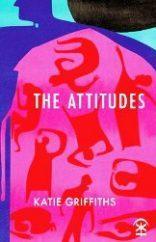 Katie Griffiths’ collection is a packet of sparklers! Second prize winner in the 2019 National Poetry Competition, her work was featured in the first volume of Nine Arches’ Primers, and her pamphlet My Shrink is Pregnant was a Live Canon Competition winner. The Attitudes is her first full collection.

In Griffiths’ poems, everything is in a state of change and everything is up for questioning, including language itself. In the title poem, placed early in the collection, she plays with the form of the Sermon on the Mount Beatitudes, taking them to unexpected places. The poem is populated by ‘moonbathers’, ‘earthmongers’, ‘soulscammers’ ‘waterstabbers’, ‘scargazers’ – fabulous characters whose fates make them strangely familiar.

As with other poems in the collection, the well-known form scaffolds Griffiths’ playful and often uneasy imagination.

Griffiths makes bold imaginative leaps; in “to know you are female does not help”, mosquitoes appear as sexual rivals:

In “Minus five minutes, Big Bang (sleeves rolled up) at the negotiating table” she personifies and gives a voice and an axe to grind to the Big Bang. In another poem she re-imagines God as a smoker, ‘for clearly he’s taken a drag/or two in secret’. And in another, Donald Trump considers how he would cross-examine himself before pardoning his own crimes.

Griffiths takes the language and preoccupations of Christianity as a starting place. Almost every poem tangles with big topics – life, death, belief, bodies and souls; the book is full of ghosts, saints, angels, St Teresa’s tambourine, celebrants and versions of a (Christian) god. Both faith and doubt seem plausible, as in “The tenants of faith”. I found it hard to tell whether this poem, spoken by ‘let’s say a coldcaller on faith’ ends on affirmation or disillusionment. It is a beautiful ending, however you read it:

I found many poems I wanted to to return to several times for further enchantment. One such was “The Priest and I Watch the Solar Eclipse Through the Safety of a Kitchen Colander”. It shines with Griffiths’ characteristically sharp and memorable imagery, and explores the intriguing idea that a solar eclipse could be seen as an act of defiance on the part of the moon, so that the priest

There is also a troubling thread that traces a relationship or debate between the narrator and her body, hinting perhaps at anorexia (a numbered sequence of poems each titled “Dough must not enter the body”).

In other poems the body is viewed from something close to a Martian perspective, as a perplexing source of wonder, discomfort, and astonishment.

I particularly admire the way lines like these bristle with surprises, yet keep a connection to what I do know or can recognise.

Griffiths is nothing if not inventive. She uses sound effects and rhyme with great fluency, for instance in “Purgatory” where a rhymed sequence moves from ‘migratory’ souls to ‘that old sob story’ of the souls begging to leave, via ‘dormitory’, ‘allegory’ and so on. There is an Oulipian poem (I think!) using mutations created via repeated use of Google Translate. In other poems she adapts forms such as a “Biography”, “Additional notes on characters”, a “S’Index”. The final “Notes” on references in the poems turn out to be a poem too!

Slightly more predictable, I found, but also enjoyable, is the poet’s use of wordplay, puns and word jokes that often seem to have been the starting point for a poem. For instance there are titles such as “Mes saints sans cafetieres”, “god is my feeder my bearer of trays”, “Baddendum”. In these, I sense her having fun with the possibilities of a malapropism, but I was not always quite convinced.

But then, perhaps the energy of these explorations also powers the wonderful and prize-winning “Do not indulge indigo”, in which the sounds, spellings and connotations of the words seem to tumble across the page, inciting each other to form syntactical strings and flights of fantasy with darker undercurrents:

These are exciting poems, often mysterious, disquieting, or out to subvert expectations, but with a light tread. Are we in safe hands? I’ll end at the beginning: “And in our idleness we compare hands”. The scenario is a conversation with an exorcist who claims to use his hands in ‘a spiritual emergency’, ’to focus the disintegrating mind.’ But the narrator has the last, tender words.