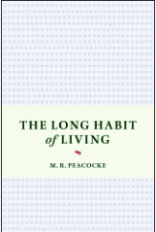 This is M. R. Peacocke’s eighth collection of poetry, which is no mean feat for someone who didn’t start publishing until she was in her fifties. Now in her nineties, she has had what her publisher describes as ‘another rush of poems, unexpected and joyous in their arrival.’ One mustn’t judge a book by its cover, or necessarily by what’s written on it, but in this case I share the excitement: it’s a fine collection, showing no diminution in her creative powers.

The title is taken from the book’s epigraph, a quotation from Sir Thomas Browne’s Urn Burial: ‘The long habit of living indisposeth us for dying’. Not surprisingly, much of the book is concerned with mortality, although this isn’t a new subject for Peacocke. It begins, fittingly enough, with a poem called “Book”, an apparently amorphous catalogue, starting:

It’s the book of her life (the poem ends: ‘…Thumb through it if you must, / it’s written and can’t be amended, this book.’) However, rather than attempting to shape experience, as an autobiography would, the poem presents life in all its randomness. The you in ‘if you must’ refers to the poet herself, or in a more generalised way to anyone looking back on their own life.

Words (‘cats in bags, pigs in pokes / Moses in baskets with all the eggs’) are central to the next poem, “Syllabary”, in which the reading lessons in the first stanza (‘… Her formal father / snipped small picture cards: pen, cup, bed’) are contrasted with her relief to be out in the garden afterwards (‘…The wind / sang and shouted for its own delight, / the whole green world its playground. / Clouds scribbled and smudged out’) and in the third and final stanza with her father’s death (‘Later, a phone rhymed and rhymed. / There lay somebody dying, defying / inarticulacy …)

In “Put”, she finds a single word to express the stage she has reached in life:

This is followed by a childhood memory of the milkman’s clip-clopping horse: (‘… the dead stoop / of gravity in the lift and plant of his vast // and simple hooves. No decision, but inherent / in each put, the atlastness of arriving.’ It’s more about living in the moment than laying down your burden in any religious way. Peacocke isn’t a religious poet and ‘life to come’ refers to life in this world. Ultimately, her attitude is stoical. In “What the Bird Said”:

The poem clearly has a particular significance for Peacocke, having previously been included as one of the new poems in Finding the Planes: New and Selected Poems (2015) and in her 2018 Happenstance pamphlet, Honeycomb. The use of heavier punctuation at the end than when the poem first appeared emphasises the finality.

Before she began publishing poetry, Peacocke had given up her previous life to run a small hill farm in Cumbria and she has a farmer’s practical, though by no means heartless, attitude to death. “Candling Eggs” describes examining a clutch of eggs to determine which are fertile (‘Pierce the shell / with your needle of light’) and ends:

One of the pleasures of reading Peacocke is not just the imagery she uses, but the strong sense of the actual that she conveys and there are a number of poems here about the physical aspects of ageing. In “Skin Narratives”:

As its title suggests, “Skin Narratives” goes on to describe incidents from her life that have left their mark on her body. Reminiscence is a natural part of getting old (‘Everything about me is a long time ago,’ she says in “Flies”). There are personal memories (“Practice”, “Leaving”, “The Clever Girls”) and also poems about photographs (“Moth” and “Sweet Thames”).

Mortality and remembering have been among her key themes, as has close observation of the natural world. There are several examples here, whether describing a beetle’s slow progress through the grass, or ‘houseflies riding an invisible carousel’, or depicting more violent incidents: an axe striking an old stump and revealing ‘small peculiar creatures legging it / or on their backs in a slow sprawl, or brought up short / with half a body, as though they’d been keeping shop / or shopping, when an earthquake struck or a bomb fell’. “Rockabye” makes a similar link between a fallen nest (‘A bough breaks, and down go all / the babies, the quilled gapers / smashed in a porridge of leaves’) and ‘Houses unroofed, walls tumbled, / windows burst, the black, distraught / figures of women scouring / among ruins. How they cried.’ If we find the imagery shocking, it’s meant to be.

Other familiar subjects are poems about characters (“The Sisters”), ekphrastic poems (“Rembrandt’s Pen”) and retellings of myth (“The Minotaur Problem” and “Jonah’s Tale”), but even if everything about her is a long time ago, Peacocke hasn’t lost touch with the world as it is today. Though “Gig Economy” is actually about the tenacity of plants growing in unlikely places, there are genuinely topical poems: “From Recent Records” about the loss of Australian animals thought to be newly extinct (‘I had never heard of you, small lives / that seem to belong to the land of Lear. Still / the loss of you accuses’; and “Exposures” about the plight of refugees, juxtaposing photographs and objects on display at Ellis Island with asylum seekers landing on the Kent coast. The exposures are multiple: photographic exposure in the first case and exposure to the elements in the second; people feeling exposed, having lost their possessions; and the exposure of our Government’s hostility towards refugees compared with the historic welcome immigrants were given in the United States.

But there are lighter poems, too. In “Exercise”, a chair being used as a piece of keep-fit apparatus segues into the French for flesh, quoting Mallarmé: ‘La chair / est triste et j’ai lu tous les livres’. After a contretemps with ‘two young blokes’ barging past her in the street, it ends: ‘Somebody tell the Ministry: / Yelling is the best exercise.’

“From Captain Cooke’s Journal, July 1770” describes the killing of a kangaroo from the point of view of both Captain Cooke and one of the other kangaroos. The marsupial’s account is written in imperfect, almost pidgin English, a device used previously in her sequence of poems about Caliban and to an extreme extent in “Goose Hymn”. The poem gains from the fact that the necessarily imagined speech of the kangaroo follows a completely unimagined ‘found poem’ drawn from Cooke’s own journal. Another poem, “Theend”, is composed of typographical chaos. It reads in full:

I don’t know about syllabics, but it’s perplexingly Sibylline.

The poem that does actually end the collection, “Pebble”, is one of a number set at the seaside, all of them involving a letdown of some kind, but all very different. “Evacuees’ Outing, 1940” describes a resolutely unmisty-eyed trip to the seaside (the coach driver ‘says they’ll be putting scaffolding all along / so everything shut off for the Duration / and no more trips to the sea thank you very much’). “Reflex” intersperses quotations from a scientific book about sea anemones with memories of a childhood encounter with one (‘a single, weak siphonoglyph. Tentacles close / to swallow me. I pull back, wake into my book, / quivering like a shrimp.’) “Dunnerholme” is about the dangerous crossing on foot of a tidal estuary (‘I shan’t go there again.’) “Pebble” itself is about picking an attractive stone out of the water:

It is a measure of Peacocke’s imagination that she can take two symbols of permanence—a rock and the sea—and turn them into an image of the ephemeral.

Beginning her career late and continuing to write excellent poetry into her tenth decade, Meg Peacocke is an inspiration to us all. I thoroughly enjoyed this book and hope that there will soon be a collected edition of her poems.