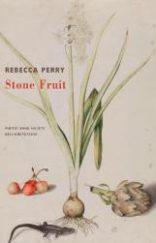 Poetry review – STONE FRUIT: Louise Warren admits to being perplexed by Rebecca Perry’s poems – but also wants to revisit them.

Towards the end of this complex, sometimes difficult but mesmerising second collection by Rebecca Perry, we discover the image behind the title Stone Fruit. In her cool detached voice Perry recalls a story she read as a child, in which a beast and a young girl are traveling through the wilderness. The beast leaves her in order to fight a duel with an enemy which will make the place safe for them. All she has to do is stay still until he returns, not to move an inch. She waits. After a time, the sky flashes red, and she knows that this is a sign the beast is victorious. Her foot twitches, barely at all, and in that moment, everything – the girl, the beast, the land, even the plants and flowers and the fruit hanging from the trees – all turn to stone. It seems the smallest error can paralyse you.

The book is in three parts and these lines appear in the final, and most successful sequence. It concerns Perry’s experience of being a trampoline artist ,where everything – her body, her training schedule, costumes, her anxieties and the pain she feels – has to be controlled.
Even her hair.

Disaster isn’t registered. A performance must be delivered perfectly she tells us;

Perry has a precise, detached voice. She observes events, often in forensic detail, as if watching herself from a distance. When a passer-by tells her that a dragonfly has landed on her ankle

Some of the text is shaped like a prose poem, the sentences separated out, the white space echoing this feeling of detachment, of distance and coolness. The sentences are clipped off with full stops. Reading it I had the impression I was following a series of fragmented moments, memories and thoughts as they occurred.

Do we care enough about these thoughts to try and piece them together as a whole? Or is it enough to admire their construction, the artful wording? Yet ultimately are we left unmoved and puzzled by it?

The first sequence concerns itself with beaches. There are 14 poems. One begins with an image of a miniature painting.

Here there are recurring images of the sea, of waves, of the sand timer as a body. Sand crabs expose their vulnerability, a lover appears, exposing a rawness of feeling. So, sex then? love? desire?

Some poems in this section barely seem to touch the sides, they are so slight.

I found there was more substance in the second part. It also opens with a painting – this time The Execution of Lady Jane Grey. So, is death the subject then?

Certainly, Perry tells us about the death of her partner’s grandmother. In one long prose poem written in that cool , detached and detailed voice she begins;

Through this poem Perry moves from that death, through to other deaths, and takes us back to the beach, the lover walking into the sea, and the sand crabs . She also writes about poetry and the making of a poem.

I wondered if that was what I was looking at, this landscape that Perry has created though her fragmented anecdotal writing , a kind of hallucination of the real.

Stone Fruit is a perplexing, sometimes opaque, clever book. I wanted to go back and read the poems one more time, to look once again, through that dusty window.