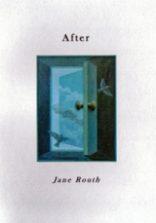 Poetry review – AFTER: Rennie Halstead is pleased to find that Jane Routh’s ekphrastic poetry is able to stand on its own while still being true to the artworks that inspire it.

In this ekphrastic pamphlet Jane Routh revisits paintings, photographs and other genres of art and records her reactions.

The pamphlet looks at seventeen different artworks, ranging, from well known pieces like Holman Hunt’s The Light of the World and Elisabeth Frink’s, Harbinger bird II to less well known regional artists. Other works are less conventional, ‘Smithson’s Jetty’ examines photos by Robert Smithson of his installation Spiral Jetty, an earthwork built from basalt, sand and gravel at Rozel Point on the Great Salt Lake, Utah. ‘Witness’ takes John Hodgson’s woodturning Fuadach Nan Gaidheal as its source and ‘White / out’ references Alison Watt’s Veronica, a painting of a white fabric.

If like me you want to know where the inspiration for the poem comes from, chasing the original artwork, takes a little effort in one or two cases, but is worth the time spent. Almost all of the work was new to me. John Behan’s bronze Ghost Boat particularly resonated.

The acid test for ekphrastic work is whether the poem stands on its own without reference to the source artwork. In this case, I think the author is entirely successful. The poems link back to the artwork, but knowledge of the work is not essential. The poems stand on their own. Seeing the artwork adds to and enhances the experience.

The opening poem, ‘After’, details the way that one artistic idea feeds into another, arguing that the creative process is continuous if we visit galleries, see plays, listen to music or look at photographs:

The poem continues exploring the effect on other characters. The potter’s accidental glaze inspires a sculptor, whose work in turn inspires a poet. It’s Routh’s ekphrastic manifesto, and perhaps no surprise that the end of the poem references the author composing it.

‘How the raven won his colours’ references The Eavesdropper by Marian Wouda, an unsettling bronze of the bird, head forward, listening. Routh imagines the bird helping a nameless god to see more clearly by developing eyes at the sides rather than the predator eyes at the front of his/her head. By seeing for him, the raven defines himself:

The raven then adds speech to his repertoire and offers advice, but is never over-awed by the presence of godhead. There are some lovely phrases: ‘his cloak of irridesence’, the ‘rippling purple sheen’ of the plumage.

‘The walking boat’ after Ghost Boat by John Behan, imagines the events that led to the artefact being found on an imagined beach. Fourteen rowers and a steersman land on a deserted shore and raise the boat shoulder high to stand on its oars: ‘a long legged / land-creature now, at rest above their heads’ The oarsmen set off to explore the island and according to legend disappear into a hill ‘shaped like a crown’. The steersman remains on the beach, watching the boat and the tides, and: ‘engraving these rocks with their signs // – long lines and spirals, circles small and deep’. After five days the steersman picks up his steering oar and walks into the sea ‘as if he breathed underwater, his footprints impressed into rocks’ leaving the boat resting high on its oars as the only testament to their arrival.

‘Fogbow’, after Near Whitby by Edward Burra, shows a road disappearing over the moors into the foggy distance. Routh depicts the poet/narrator standing in a gallery ‘absorbed / by a watercolour of hills, its brushstrokes / ruddling dark earth’ and remembers another time when:

Routh goes on to show the fog ‘gulping / the last few pines’ and describes it as ‘a solid wall / rolling towards us’. In the last lines, the poet wonders if it is:

These lines are perhaps a fitting summary of the pamphlet, Routh’s mind floating free over the meaning of artworks, the way we interpret them and apply them to our own understanding. Routh is a story teller at heart. She creates narrative poems from the artwork she has seen. A most enjoyable pamphlet.