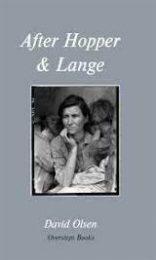 This collection responds mainly to photographs by Dorothea Lange and paintings by Edward Hopper but also takes in some other creative artists including Walker Evans and Andrew Wyeth. Many of the poems are about the 1930s and 1940s which were haunted by the social and financial impact of the Great Depression and the aftermath of the Second World War in America.

Lange-related poems feature in the first half of the collection subtitled ‘Dispossessed’. Here, racial segregation plays an important part in the story Olsen relates. The poem ‘Plantation Overseer, 1936’ has a striking image of ‘black / field hands’

In ‘Separate but Equal, 1939’, Olsen describes the bleakness of ‘this “Non-White” Cemetery’; he suggests that even in death there is separation. ‘Subjects Unknown’ deals with photographic portraits in the Metropolitan Museum of Art. The narrator considers that curators are hopeful of discovering

Olsen goes on to observe that these subjects are ‘yet equal before the lens’. This can be seen as asserting the objectivity of both photographer and poet. In all the poems Olsen captures what he and the photographer see but also implies social commentary.

The hard grind of poverty comes across very powerfully in the poem ‘Pea Pickers, 1936’, in response to the photograph ‘Migrant Mother’ taken by Lange. The poem ends:

The scenes in this poem really brought to mind John Steinbeck’s classic novels of the period, particularly because of the way Olsen describes the land:

The daunting physical and emotional landscape of this time is also described in the next two poems. In ‘Tractored Out’, we hear of:

The narrative in the poem ‘Families on the Road’ reflects photographs by Lange of families travelling through Oklahoma, still seen as

A different form of dispossession relates to the internment of Japanese-Americans in the Second World War. I particularly liked the empathy in ‘Grandfather, 19 May 1942’:

The poems in the second half, subtitled ‘Alienation’, are more focused on the internal feelings of isolation which Hopper suggests so well in his paintings. Hopper’s images are often used as a prompt for poetry workshops as they invite the observer to create their own interpretation. By doing a sequence of poems about Hopper’s work, Olsen takes us much further into a particular mindset. The poems work well together, building up a cumulative sense of solitude.

The poet’s ekphrastic approach is very descriptive of the paintings and photographs. He picks out details so we feel we are standing in front of the images. The first poem in the second half, ‘Dawn in Pennsylvania, 1942’, is about waking up in a sleeping car on a train. This poem introduces a number of images that are echoed in later poems. In the ‘half-light’, there is ‘a faint shadow’ and ‘the platform’s ghostly grey vacancy’. This adds up to an in-between world:

In the next poem, ‘Manhattan Bridge Loop, 1928’, windows ‘appear uninhabited, vacant of life’ and the poet focuses in on

A text note comments on the similarity between Hopper’s paintings and Vilhelm Hammershøi’s paintings of his wife. Both artists portray loneliness. In ‘Room in Brooklyn, 1932,’ Olsen suggests Hopper’s subject could be Ida Hammershøi. He points out the woman’s ‘muted dress’ and writes that she is ‘oblivious to the monotonous façade’. The final image of a woman who will ‘bestir herself to cook a meal for one’ is surely the epitome of loneliness.

In ‘Automat, 1927’, the details of what the woman wears as well as what she eats and drinks puts us right next to the automat. This poem is much more upfront about loneliness and then surprisingly turns to let the character challenge the narrator’s assertion that

The last nine lines of this poem comprise a defence of choosing to be alone, ending with: ‘Sometimes I just need to be by myself.’

In the poem ‘Night Windows,1928’, Olsen aptly suggests that Hopper’s usual approach (not in fact used in this painting) is one of ‘inside looking out’

Olsen’s attention to detail always situates us very solidly in place and time. We get a real slice of city life in this era. ‘New York Movie 1939’, starts with the line ‘The slender long-legged usherette’ and ends with the words ‘Her feet hurt’. In between we get a glimpse of ‘sconce lamps’ and ‘red plush seats’ as well as what she might be thinking and the fact that war is on the horizon. This spare but full portrait makes good use of short lines.

This collection has a compactness of form and narrative which suits the styles of the two creative artists who act predominately as Olsen’s muses. His poems effectively evoke the hardship and solitude that many endured in the USA in the first half of the twentieth century. In doing so, they remind us that many of the issues are still resonant today.