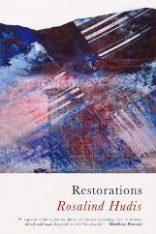 Rosalind Hudis’s knowledge of art restoration – its materials and processes – has supplied her with an arresting lexicon and an abundance of metaphor. This allows her to reframe familiar subjects as she explores childhood memories, family life, parents aging. Her poems also encourage us to look with fresh eyes at works of art.

The opening poem, ‘Shellac,’ serves as a kind of prologue to her project. In a poem that explores time, childhood memory and geo-political change the reader is drawn to consider The Philips London Library globe, its layers of significance. First, the childhood memories of being told it’s ‘not a toy’, then on to the facts of its materiality in the present:

Many poets use old photographs as a trigger. Here, in ‘Fixative,’ Hudis shifts the point of view, to the person developing the black and white image, to the chemical processes:

Hudis plays further with point of view to refresh our eyes and assumptions around works of art in poems such as, ‘Portrait of the Artist as a Pear,’ ‘Millais Floats Ophelia’ and the entertaining monologue, ‘The Artist Mixes Colour in the Renaissance,’ in which she restores the artist:

The poem continues in this vein, subverting what John Berger referred to as ‘relic worship’ as Hudis, also restores the condition of its making:

There is humour here too, in poems such as ‘Interior,’ a family portrait via the marks made on the walls of rented house which is ‘… wholly magnolia,’ until ‘… one sister/drew in jam the fate of another.’ Later on comes, ‘…the blur/of a lobbed plate, archaeology of chocolate …’ and ‘… mud Pollocks mushed by the soft/dissolution of moths …’

As the collection shifts towards more of family life – the illness and death of parents – Hudis sustains her forensic, art-informed explorations. She brings fresh eyes and awareness to the condition of dementia in ‘Book of Masters.’ Here is a father who, ‘believes in Art …’. Father and daughter view a much-treasured book of reproductions, ‘his holy book…’. They turn the pages on angels, ‘lemon groves and towers/fleshy murder in forests …’ until images merge with the viewers:

In ‘Hospital Art’ the poet staves off the pain of visiting the terminally ill by navigating her way down brightly colour coded corridors: ‘I play the curvature of blues…’

This is an intelligent, thoughtful and thought-provoking collection. Hudis works in a variety of forms, some experimental; often her challenging lineation keeps the reader intrigued. These richly-textured poems repay several readings in order to uncover the layers within. The reader, like the restorer, uncovers fresh layers with each return to the work.

Pamela Johnson is novelist & poet. Her poems appear in magazines, many anthologies and in Stories & Lies, Blue Door Press, 2018. Her sequence, Tidelines, was featured at Poetry In Aldeburgh, 2017. Her third novel, Taking In Water, (Blue Door Press, 2016, https://bluedoorpress.co.uk/books/book-1/) was supported by an Arts Council Writers’ Award. She taught fiction on the MA in Creative & Life Writing, Goldsmiths, 2002-2018