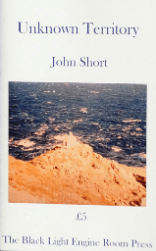 Black Light Engine Room is an independent press that has been publishing for over a decade. It is based in Teesside and has a canny, intuitive, almost mystical knack of publishing highly individualist writing and John Short’s Unknown Territory fully affirms this. Short’s pamphlet contains twenty-eight concise poems of maverick, free-spirited realism.

The introduction of the work informs us that ‘John Short grew up ten miles north of Liverpool and studied Comparative Religion at Leeds University. Later, he set off for France, surviving as an agricultural worker, factory operative, hotel receptionist, English teacher and musician. He settled for eight years in Athens, returning home in 2007.’ These poems are inspired by the poet’s time in Greece; Flaubert’s words are pertinent to this text; ‘Travel makes one modest. You see what a tiny place you occupy in the world.’

Appraising this work on the hottest day, so far, of 2021 only adds to any reminiscent cloy of my own sweltering memories of Greek summer, and does so deliciously. Short’s tone and the title of this work are born from the voice of experiences on the edges of another country. These poems are infused with dignity, gratitude and respect which never attempts to intrude, overwhelm, or own. ‘Poem for Rodos’ declares

Imagery in each free verse poem in this book is perfectly measured, often sparse and acutely precise, allowing the reader freedom to intersperse, perhaps, anecdotes of their own chance meetings of travellers in those universal bars. When bountiful, imagery is an onslaught on all senses. ‘Transition’ describes

The poet’s lines are short, mostly tetrameter, of quickness and celerity and they tell of time spent surviving by one’s honest wits.

There is a searing authenticity within this entire collection which is immensely refreshing and satisfying; I am reminded of Glück’s insight that, ‘honest speech is a relief.’ The poet charts his journey in the shadow of ancient architecture, juxtaposing its magnificent size and position in the poem ‘Severance:’

There is a slight reference to mythos in ‘On Ikaria:’

‘Island Candles’ is a beautiful poem of faith and chance and in ‘On Philopappos Hill,’ an exquisitely painful generational understanding is expressed with finely wrought candour when, ‘My father has come to visit/so I take him for a walk.’ In ‘Kaminia:’

Short is extremely adept at writing the most interesting characteristics of those he meets along the way, always with respect for their journeys too; football fans, old salts, tourists, a stray dog carried to water, an ‘Albanian Maid.’ In the poem ‘On ‘Taigetus:’ ‘He was never a friend/ just some guy I met in a bar’ or a waitress; while in ‘On Zakynthos:’ ‘she glides/like a tall, efficient statue washing/wiping and collecting cups.’ Other character sketches are:

Unknown Territory is a deeply contemplative collection of poems full of awareness, both inferred and explicitly written; Short knows how people tick and I am drawn into his words of universal truths. This work is distinctive. This book is warm, sometimes against all odds. I get the sound of bluegrass bouzouki in my ears, the taste of tomato and oregano on my tongue and a desire to return to each poem and the Mediterranean places so well evoked.