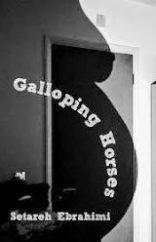 Setareh Ebrahimi is an Iranian-British poet, with a Master’s in English and American Literature from The University of Kent. Galloping Horses is her first collection. It is an eclectic collection of poems covering themes of motherhood, alienation and monstrousness. Some poems are rich with a dark symbolism and possess a surreal quality.

The theme of motherhood figures in a number of the poems in this collection. “Galloping Horses”, the title poem, compares an ultra-sound scan to watching life in a fish tank. We are caught in that ‘underwater world’ with the ‘weird fishes’, with the scanner ‘a submarine with a rotating light / looking for life’. For Ebrahimi, the foetus is on that threshold of existence, visible, but not distinct. But with the delight in the ultrasonic image is a fear;

Despite the discomfort and anxiety, Ebrahimi is positive ending the poem:

The motherhood theme is picked up in “I Love You In Blue”, with the author facing the dilemma of keeping outgrown clothes. In this case, it’s a ‘yellow spotted vest’ that reads ‘I love you’ in blue,’ and although the author has ‘ no use for these things,’ there’s a sense of reluctance to give away the item the baby was wearing when the author took a picture of the baby :

But, like all parents the necessity of recycling baby clothes has an urgency because:

A second theme that appears in the collection is the idea of alienation. In the prose poem “Lulu”, Ebrahimi creates a vivid picture of schoolgirls grappling with the realities of puberty and relationships with boys. Lulu in particular, seems to face difficulties that mark her as different. The poem starts dramatically:

Lulu’s relationships are troubled. When she wants to ditch the abusive boyfriend her brother has a word with her outside the swimming pool. Ebrahimi is surprised. ‘I didn’t realise things like that happened in white families.’

In the same way the author wouldn’t kiss her ‘wet fish’ of a boyfriend ‘so he wouldn’t be able to tell ‘I hadn’t kissed before. / Besides, my father only let me out for school.’

Lulu gives up her interest in gym ‘to spite her mother.’ but ‘After she became curvaceous, the boys made fun of her.’ And the author, disillusioned ‘stopped turning up, smoked weed, taught myself from textbooks.’

“Graveyard Girl” examines the same theme through a visit to a graveyard by an unspecified visitor. There is some beautiful imagery. The tombs are:

and the stone statues of the angels:

Perhaps the most moving alienation poem is “Brown Goddess”. Ebrahimi describes having to:

and more settled people from ‘my country’

Ebrahimi describes how she had to:

She builds the shrine to her ‘brown goddess large’, ‘loved her like a child’ until she becomes comfortable with herself and realises ‘as the sun shone on her / and I caught her reflection finally / she was I.’

There is also a strong theme of the monstrous is some poems. In “Monster”, Ebrahimi addresses the issue of the unthinking male gaze, the masculine assumption of control. The man in the poem:

The people around him are ‘broken dolls’ and the author recognises she too is in some danger as ‘there’s a chance / of becoming one.’ His arrogance is shown in his belief that:

The author is critical of herself as a member of society that tacitly accepts assertive masculinity:

Amongst the surreal and serious topics Ebrahimi considers, there is room for poems that are a simple redeeming assertion of the positive. I particularly liked “Purple Poppies”, with its close observation of this delightful but fragile flower. Ebrahimi captures the beauty of the bloom:

She celebrates the wildness and freedom of the flowers, how they resist attempts to control and manage them: ‘the conditions they need / are wild, freedom.’ and when people try to pot them or pick them, they collapse. The poem ends with the lament, ‘Oh why couldn’t you leave them, / dancing?

It took me several readings of Galloping Horses before I felt I had fully come to terms with Ebrahimi’s work. The sense of disconnection that runs through the volume means that not all the poems are immediately accessible. They repay re-reading, reading out loud, and reflection. In many poems Ebrahimi creates striking images that live on after the poem is finished. I look forward to reading future work by this emerging poet.