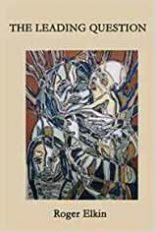 The Leading Question is a bold and accomplished contribution to Irish Famine literature by Roger Elkin, one of our most versatile poets, editors, critics. In this his 13th collection he is deeply troubled by the suffering he sees depicted in the Irish Famine Museum where the events of the potato famine of the 1840s are displayed. His powerful imagination and skill find “poetry-a-plenty” in this tragic story. He shows that when History overwhelms us, Literature begins to tell its truth and catch the heart. The tale is in many ways a mirror-image of our own times, the Covid pandemic, large-scale famines, genocide and tyrannies, to name a few.

Each voice enriches the collection with its own pattern of tone and attack. Many poems are written in looser free verse rather than regular couplets or quatrains. The result is a unique rhythm of narrative, lyrical, and politically-committed poetry interwoven with prose pieces that provide the historical context. The overall effect moves between what is evident and what is invisible, between the grim and the fruitful, the true and the false, the recorded and the withheld. The entire collection endorses Tony Harrison’s view “The dumb go down and are silent.”

We have to wait to find the significance of the title The Leading Question until the title poem appears on page 46, as Elkin builds the backstory of the Famine to explore:

The “Lading bill” is a Bill of Entry to the Port of Liverpool, evidence that Ireland, a net exporter of food, saw its population starve to death.

Elkin responds powerfully to quotations from many sources that “anchor the poems” as he states in a 2014 interview for the Sentinel Poetry Movement. These sources include government reports on the famine, Diderot’s Encyclopedie, Queen Victoria’s letters, police reports, newspapers and even Delia Smith’s How to Cook (1999). In a number of these Elkin returns to his vexed theme “where suffering’s been distilled to Art”; and the question “And what of words?” as in the poem “Stable Truths: The Irish National Famine Museum”. In section III of “the lazy man’s crop” language is patterned with assonance, and the alliterative qualities of words and arranged in unexpected ways, to evoke the rhythms between humans, land and spade. Deft use of onomatopoeia enhances the rhythmic putting in of seed potatoes and lifting them out. Also in “the lazy man’s crop V” we find a wonderfully rhythmical celebration in a list of the potato varieties: “Thistlewhippers; Leathercoats; Kidneys (Red Nebs and Bangers)”. In poems like “Comparison”, “Ballast” and “Illuminations”, official reports, percentages, prices and lists of commodities appear in sections of poems that provide a depth of feeling and transform statistics into art. This is verse that has clearly had a great deal of care taken over it.

“Holding”, the opening piece, skilfully enacts the poet’s gradual discovery of the truth of the Famine Museum and the suffering it shows. The poem takes us through observation after observation by means of verbal participles, delaying the main finite verb “becomes” until almost half-way through. One moment the poet likens the feel in the hand of a potato with that of a flint tool, the next the curved shape evokes a ritual that conjures a reality greater than itself: “earth, stone, bone, history” conspire in a timeless present. The potato partially symbolises the weapon used against the Irish peasantry by the English, and is simultaneously the source for the bountiful crop of the poems about the famine. At the end of the collection, “Think Cropping” with its ambiguous title recalls other human tragedies from the murdered Windeby girl in the German peat bog, to Cromwell’s Drogheda, Auschwitz and Bloody Sunday.

Yet it is to the paradox of artistry that Elkin often returns, asking how words and visual arts can express the truth of such a tragedy. In “Statue Group, Custom House Quay, Dublin” the poet sees a photo opportunity as the light prompts questions of how “suffering’s been distilled to Art” with “such beauty among such loss”. Elkin mentions Rodin’s famous The Burghers of Calais and Gustav Courbet’s painting of peasants in the two poems “Words…” , “…and Pictures”. We feel the bitter contrast between, on the one hand, art that challenged bourgeois society and, on the other, the artistry that confirmed Irish stereotypes by lampooning them in English cartoons.

The poet reflects on the meaning and purpose of inner doubt and pain, suffering and turmoil in the searing poem “Dubh Lough Tragedy: March 1849” when starving, Irish peasants, refused admission to the Louisburgh workhouse, perished beside the black waters of the lake. The poet confesses “it’s difficult to understand why History so glibly diminished their success” (“The lazy man’s crop II”).

In “The Big Issue”, History is unable to answer its own questions, “how/when/why” as the famine takes a turn for the worst. A number of poems such as “Spalpeen”, “Task Work” and “Rich Pickings, Skibbereen 1846-47” take the reader into the daily life of the Irish peasant, the human warmth and solidarity worn away by grinding poverty, pitiful and pointless work and an inhuman administration. In “The national pet” we feel the pig’s physical presence in the home, “its thick pink skin” and “ huge , heavy ears”. The lines suggests an affinity with Ted Hughes’ “View of a Pig” who finds a kind of sympathy in its death, a contrast with Elkin for whom the pig becomes a symbol of exploitation, sold to settle the rent. Elkin conveys the family ritual surrounding the pig and shares a tender note of humanity, “always a platform-bed/ for up to twelve and always a space / for vagrant strangers”.

“Pyramid Economics” sets the wealth of the land alongside the peasant reduced to the very soil, “so lived all year with the stench of festering, smelling wealth”. In a sequence of “no” statements “no steel tools beyond scythe, spade, sickle/ and peat-nicking loy”, the peasant’s life comes down to “pig, dung and spud”. Even those able to survive by their wits – as in “Dan Byrne’s Hunger”, a ten-poem sequence that takes us to the edge of the Famine pit – are forced by hunger to emigrate on death ships to where they believed “New Edens would begin”.

A number of poems bitterly record remedies concocted by the prevailing authorities: “Recipe for dealing with the diseased potatoes” and “Eradicating the Rot”. We see the appalling Whig treatment of the peasants contrasted with the care that Crown Agents landowners devoted to profit and export. “And this in a Christian country?” Elkin asks.

“Dog’s Dinner”, a harrowing poem that celebrates the food arriving by boat with an Argentinian captain, jolts the senses when the corpse of a mother reveals she has been eaten by dogs. “Acts of Union”, echoes Heaney’s poem of the same title, but this time describes the workhouses as they appeared in Ireland, decorous with Tudor facades, despite causing thousands of deaths when they rejected starving applicants because the buildings were overfull.

“Task Work” tells of the pointless work, earning 3d a day offered to the Irish, and ironic in the way poetry can express starvation so eloquently, “two splats of stirabout’s whetted maize / eaten off spades swiped twice on the grass.”

Elkin never steps away from confronting the inadequate authorities who were preoccupied more with their Palladian mansions and financing war. In “Sentence Structure” we see Palmerston, twice Prime Minister, privileging the nominative-verb-accusative structure of sentences while emigrants from his lands arrived pitiful and naked on foreign shores.

The back cover indicates that The Leading Question is an extract from “an extensive sequence entitled That F Word.” If the other poems from that sequence are as good as the ones in this selection, then the full collection deserves comparison with other masterpieces of human suffering: such as Akhmatova’s Requiem of the Stalinist Terror, Celan’s Todesfuge of the Holocaust, and Yang Jisheng’s Tombstone the epic about Mao’s Great Famine.

In The Leading Question Roger Elkin rises to the poet’s calling by identifying injustice and disturbing us with the truth.

He studied English at the University of Durham, with postgraduate work at the Universities of Manchester, Sheffield and Newcastle -Upon-Tyne. He taught in schools and was Senior Lecturer in English at University College Chester. He contributed entries on Greimas and Malinowski in “Key Thinkers in Linguistics and Philosophy” (Edinburgh University Press). He also contributed to the field of Irish studies in “Irish in the East Cheshire Silk Industry 1851-1861” (published 1987) and “The emergence of supervisory elite in the nineteenth century chemical industry” (published 1992) in the Transactions of the Historic Society of Lancashire and Cheshire. He is currently running the Poetry Stanza in Staffordshire.