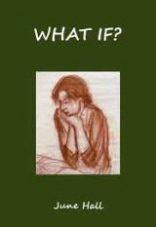 Poetry Review – WHAT IF?: Maxine Linnell gets to know June Hall through the honesty of her poetry

I was tempted to begin this review with Parkinson’s Disease, because the poems gather around June Hall’s experience of Parkinson’s over many years. But the strongest impression of this book is of June herself. Whatever collection of stereotypes, knowledge and anxieties any of us might bring to the topic, these poems show us a woman who has a relationship with Parkinson’s, who knows it and is willing to face up to it and to her feelings about living with it. That is a gift to us all.

Parkinson’s is June’s constant companion, but there are so many other relationships in this book – with family, friends, doctors, her past, her fears and her frustrations. She gives names to aspects of Parkinson’s’ impact which allow her to take a step back, rather than fully identifying with them. June is not Mrs Wobbly or Mrs Dribbles; she is June negotiating a relationship with her experience and her life as it changes. As she says in her introduction, ‘living with Parkinson’s is tough, but not all of it is bad.’ The poems map shifts in identity, the bumpy journey of illness.

There’s lightness and humour, there’s anger, fear and despair. And there’s something powerful about all of those being expressed in the form of poetry. Poetry can distil life, with a strong spirit being the product.

The poems are open, accessible in language and form. June starts at the centre, the beginning of her relationship with Parkinson’s, in “Stranger”:

June’s skills with words and images are evident right from the start and they remain intact and resonant. But the best poetry isn’t only a matter of skilful words and forms; there’s the sense of the poet daring to look and live and name what many of us prefer to keep hidden or unknown.

There is the first meeting with the consultant, the one where the label is fixed irretrievably and the future is spelt out:

That relationship continues through the book; there’s a sense of time passing, life changing. “Mrs Dribbles” maps another stage of working it through, with anger, loss and frustration.

Perhaps this book might go on the booklist for trainee neurologists. Perhaps we all need to remember about whole people. And, as someone who doesn’t have Parkinson’s but knows people who have, I’m strongly reminded never to reduce anyone to a label. I know June wants to share her experience with others who have Parkinson’s, and perhaps that will support others in staying aware and whole in the midst of it all.

Many of the poems have a recognisable form: regular stanzas of two, three or four lines; and there are two villanelles. There’s order and organisation to convey and condense experience. Then there’s the disorder of “The Shake” on the page, mirroring the disease:

At the half-way point, “Shivers” tracks memories of shivering from childhood to now. The writing is condensed and sharp. The sounds echo the feelings:

The sense of time passing is strong in the two villanelles in the book, “Fine” and “Ten Years On.” None of the poems have a date attached, but I remember “Fine” from an earlier collection. The two poems face each other on the page, written ten years apart. They map the ‘helpful’ responses from other people, and the reality of the poet’s feelings. In the first, there’s still a possibility of masking, of acting as if things were better, of saving others’ feelings. And then there’s the outburst at the end:

“Ten Years On” puts us in the place of the acquaintance not knowing what to say, and the poet’s internal response (in italics):

I’m reminded of Katherine Whitehorn’s book, You’ll Get Over It, about others’ reactions to her grief at her husband’s death. And I’m remembering how in grief I searched out the writers who were willing to speak out as courageously as June does about the lived experience.

I wept at the poems which name what happens, as for instance the ‘Stranger called me’ in “Chronic” who has to be accommodated and can’t hide anymore. There’s no sense of being passive here: the emotions flow and overwhelm, but there is June in the middle of it all, still seeing, feeling, writing, shaping. The book is a challenge, and a delight too, for all its honesty.

The last poem is a poem of protest and determination, written as the poet looks at the practical aids people use:

And there’s no full stop at the end.