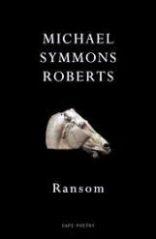 For me, the high spot of The Michael Symmons Roberts collection Ransom is the central sequence “Vingt Regards” which, the end notes explain, is based on a set of twenty piano pieces by Olivier Messiaen entitled Vingt Regards sur L’Enfant-Jésus. The idea of Jesus as Redeemer of the World clearly links with the book’s title and overall theme of rescue and release from various kinds of bondage; but the sequence underlines this connection by drawing on the fact that Messiaen composed the music in Paris in 1944, both during the occupation and after the liberation. On top of this, the poems also make use of the knowledge that the classic film Les Enfants du Paradis was being made in Paris at the same time. This background gives the whole sequence a very satisfying coherence and texture — even if the reader is unfamiliar with the music which has inspired it.

The poems in “Vingt Regards” obviously pick up on the various views of The Incarnation which inspired Messiaen’s piano pieces and the subtitles he gave them. But Symmons Roberts touches quite lightly on these religious elements; and while the opening line ‘I long for nothing but to hold him close’ could be a devotional response to an image of the infant Jesus it could also express the wish of an elderly man in occupied Paris who longs ‘to see my son out of uniform’. Throughout the sequence there is a similar merging and overlapping of both earthly and heavenly notions of release from restriction and from suffering.

A sense of looking forward to some kind of liberation is found in two poems about rehearsal. “Rehearsal for the Day of Joy” begins with a Degas-like image of dancers ‘half made up // in a mess of costume rails, water glasses / topped with a dusting of rouge.’ This offers a fleeting foretaste of the actual performance of a dance of freedom that ‘will not be held back – not even by those ‘who think they hold this city captive still’. “Rehearsal for the Death Scene” refers more explicitly to the infant Jesus and the crucifixion which awaits Him. It is in the voice of the tree from which the cross was made and begins ‘If trees could walk like men…’ (a play on the words of the partially healed blind man in Mark 8:24). This tree says that, if it could, it would carry the ‘beautiful boy-god’ through the city in order to

But the end would still be inevitable. The boy god would ‘grow so heavy that they / nail you up to keep you here’.

The sequence uses other behind-the-scenes metaphors in addition to rehearsals. “Sound of the Son becoming the Son” imagines a foley artist trying to create a suitable sound to accompany the cosmic drama of ‘all that ever was, and is, now gathers into this.’ “By Whom Everything was Made” reflects on the insidious effect of creating false impressions, using the example of the theatrical set designer whose ‘curse’ is

The illusions involved in set-dressing leads naturally to other questions of trust and deception and the extent to which an audience can collaborate or resist. The wonderfully cinematic “Madonna of the Gauloises” sets a first-person narrator in a café rendezvous with a stranger who ‘must be sure which side you’re on.’ When it is established that ‘no one could call me collaborator’

The whole poem successfully creates the atmosphere and sustained tension of film noir. However there are others which go for the powerful vignette or freeze-frame:

Alongside its striking visual images, the sequence acknowledges the power of words. For instance, well-chosen words can dispel false impressions as in ‘It’s time to tell the truth about the stars’ – which is that they are indifferent to humanity whatever poets and astrologers might say about them looking down on us. (By contrast however “Gaze of the Holy Souls” reminds us that we are looked on with great attention by those ‘clouds of witnesses’ (Hebrews 12) whose only question is ‘do you live by grace?’) On the other hand, words can also captivate and confuse, as in “Massacre of the Innocents” where a troop of soldiers are persuaded to surrender by

On a more hopeful note,  “First Communion of the Madonna” speaks of the power of authoritative words and what they can accomplish in the way of deliverance:

“Vingt Regards” contains many such haunting and resonant descriptions, vivid and concrete but with numinous overtones. The poems speak profoundly to the numerous ways in which people and situations can be in bondage and yet entertain hopes of some kind of eventual release.

The poetic and imaginative virtues displayed in this central sequence are also to be found in the other parts of the book, of course; but these other sections seem to lack the coherence provided by the convergent elements that feed into “Vingt Regards”, as outlined in the first paragraph of this review. The notes tell us that  the closing sequence “Takk” ‘takes some of its geographical bearings from the café of the same name under the Mancunian Way’. It consists of shorter poems which seem less intense and compelling than those we have been discussing. The other two, untitled, sections spread the notion of captivity and release rather widely and include kidnapping, house arrest, and the takeover of a computer by hackers. These poems are nearly always interesting in their language and imagery; but I have to say that some of them feel a little off-hand. The opening poem, for instance, deals with someone listening to a tape recorded ransom demand and trying, from the ‘timbre of passing cars, // dialects of distant dogs, / to figure where they held you’ – only to deflate the puzzle with the final unexplained couplet ‘When you walked in, / you scared the life out of me.’ I find a similar last-line let-down in the vivid, if macabre, poem “Beheading the Horse” which concludes when the severed head begins to talk and the poet confides

Notwithstanding these relative reservations, Ransom is a collection that I have enjoyed revisiting while composing this review. I will be surprised if subsequent re-readings do do not release further pleasures.